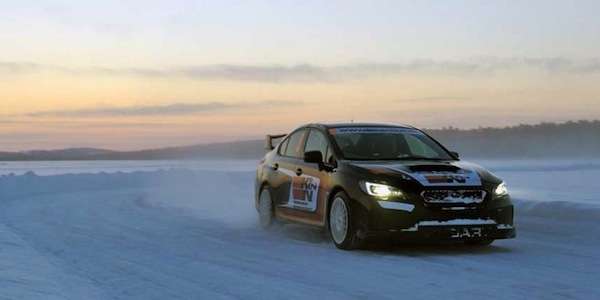 This is the last day of winter and Subaru WRX STI enthusiasts are getting ready to switch out their winter tires for summer performance tires soon. Winters in the north of Finland last around 200 days with permanent snow cover from about mid-October to early May. It’s the perfect environment for an extreme winter driving school that features the new 2015 Subaru WRX STI.

Driving the 2015 Subaru WRX STI in the snow is about as high on the fun meter as you can go. In the far northern region of Finland, three champion Rally racers have combined their 30+ years of competitive driving experience to form a unique driving school named Ice Action & Training. Students can learn how to drive a performance WRX STI in extreme snow and ice conditions and have a blast doing it.

The school lasts 3 to 4 days where students get behind the wheel of specially equipped 2015 Subaru WRX STIs as well as Subaru BRZ sport coupes and take them to the limit. The Ice Action & Training school is set on 1.7 square miles in the far northern region of Finland near Ivalo, Invari. Students learn performance driving techniques for ice and snow surfaces, sliding surfaces, circular paths, and several load change sections. The school also incorporates a rally handling track with high snow banks where it holds a special rally stage race up to 6 km long.

DON’T MISS: A rusted out Chevy Chevette with snows will run circles around a WRX/STI with all-seasons

Performance fans around the globe in northern climates have fun in the snow with their Subaru STI. Ice Action & Training in Finland takes the 2015 Subaru WRX STI to the extreme limit on the fun meter.