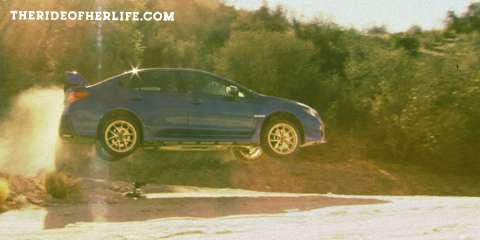 The all-new 2015 Subaru WRX STI is going to be a film star as Bucky Lasek plays a mysterious drifter in “The Ride of Her Life!”
Advertisement

Bucky Lasek is a RallyCross driver for the Subaru Puma RallyCross Team, but is about to star in a new movie called “The Ride of Her Life.” The 2015 Subaru WRX STI is also going to star in the film. The new movie will also star Michael Wiles, Kayslee Collins, Jenette Goldstein, Eddie Rice, Jr. in the DoubleURXXX Productions film. It's due out this spring.

The film is about a gorgeous young country girl who falls in love with a handsome, mysterious drifter (Lasek) and his handsomer and mysteriouser car, (the 2015 Subaru WRX STI) igniting a winner-take-all war between him and her overprotective father, the toughest sheriff in the world, forcing her to choose between the man who raised her and the man with the turbocharged machine to give her, The Ride of Her Life!

Bucky Lasek has been driving for the Subaru Puma RallyCross team for the past two seasons and now will try his hand at acting. He’s been successful as a professional skateboarder and has some success as a professional driver for the Subaru team. He was awarded the prestigious GRC Sportsman of the Year last season; which is voted on by fellow GRC competitors. “I’m really looking forward to getting behind the wheel of my Subaru again, as well as working with such a devoted team,” explained Lasek. “We gained momentum last season as we developed the STI for Rallycross; and 2014 looks to be a defining year for us!”

The Subaru WRX STI that Lasek drives for the Subaru PUMA RallyCross Team is much different than the 2015 STI in the movie. The RallyCross car pumps out 600 horsepower and an impressive 750 lb ft of torque. The Global RallyCross cars have undergone extensive modifications beyond the engine. Changes include relocating the radiator and cooling system to the rear of the car. This is done to protect the radiator from flying debris and impacts typically found in wheel-to-wheel rallycross. The modified WRX STI makes extensive use of carbon fiber to reduce weight. The WRX STI race cars weights in under 2500 pounds which is 700 lbs lighter than a stock 2015 WRX STI.

The new Subaru performance sedan will get plenty of time on the big screen as Lasek plays a mysterious drifter in the new film who picks up Kayslee Collins in his new 2015 Subaru WRX STI and they fall in love. We aren’t sure if she falls in love with Lasek, or his new high-performance 2015 Subaru WRX STI sports car. The love affair ignites a winner-take-all war between Lasek and her overprotective father who is a tough sheriff in a small town somewhere in the west. Watch the trailer below for the new "Ride of Her Life" film.

Watch The Ride of Her Life Official Trailer (2014)