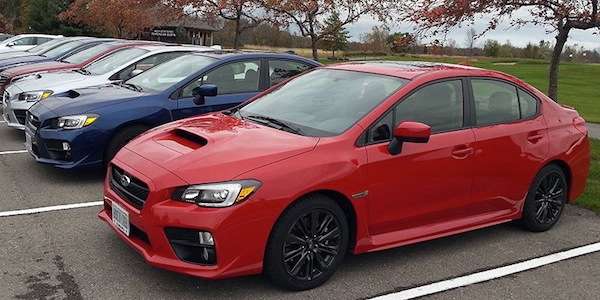 Even though Subaru sales in Japan have fallen, 2015 Subaru WRX STI sales are booming and one group couldn’t be happier.
Advertisement

Partly because of exports of the new Subaru WRX and WRX STI, Japanese automaker FHI, posted rosy second-quarter profit growth as a weak yen made their exports more lucrative. Subaru benefits the most among their domestic peers from a cheaper yen because they ship overseas about 80 percent of their Japan-made vehicles. Driven by red-hot sales of WRX/STI and the Forester SUV in their biggest market, the U.S., Subaru recorded a 34th straight month of sales growth in September.

Fuji Heavy Industries Industries Ltd. is the smallest of Japan's eight passenger car makers, but they are the most profitable this year. FHI raised its full-year operating profit forecast to 382 billion yen from 340 billion yen, and lifted its dividend forecast for the year by 6 yen to 62 yen. Subaru said even though it now sees weaker than expected sales in Japan and Europe, they now expect to sell 22,000 more vehicles overseas this year than initially forecast thanks to brisk sales in the U.S. and Canada.

The 2015 Subaru WRX series of performance cars is selling fast at Subaru dealers around the globe. Here in the U.S., Subaru of America reported the new generation 2015 WRX and WRX STI performance sedans have seen a 33.2 percent increase in sales year to date. They only trail Forester and XV Crosstrek in percentage of sales. The new generation 2015 WRX STI that launched this spring has been a big success for the brand.

Partly because of the large number of 2015 Subaru WRX/STI exports from their Japan Gunma factory, Fuji Heavy said its quarterly operating profit jumped 32 percent to 106.94 billion yen, beating the consensus forecast of 95.34 billion yen. Revenue rose 24 percent to 716.85 billion yen in the first half of 2014 for the Japanese automaker making their investors very happy.