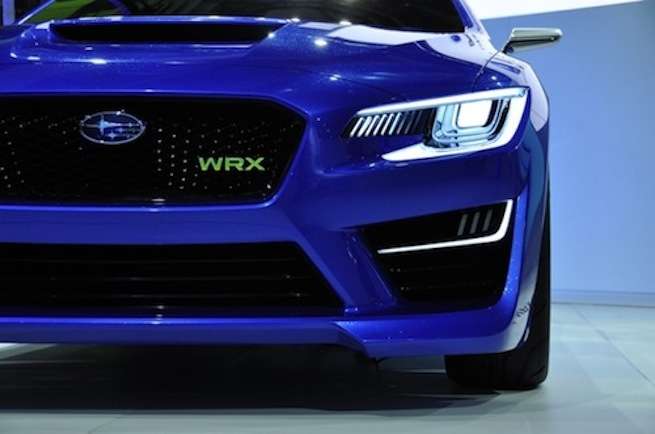 The next-generation Subaru WRX STI is confirmed for an early 2014 launch and it's getting significant upgrades both under the hood and in the cabin. The LA Auto Show 2013 will reveal the next-gen 2015 Subaru WRX and the new WRX STI won’t be far behind. In a report from Motoring.au, Subaru Australia Managing Director, Nick Senior, outlined the timetable for the new WRX's arrival in Melbourne and also revealed a few things about the new higher-performance model STI.

We know that Subaru is committed to producing performance models and the WRX and WRX STI won’t disappoint when they both launch next year. The next-generation WRX will launch in the first quarter of 2014 with the WRX STI launching shortly after. In the Motoring.au report, he confirmed the new WRX would be on sale before the end of the first quarter of 2014.

Senior also confirmed the next-generation 2015 WRX STI would launch much sooner following the WRX on sale date than in the past. Senior says, “In the past the gaps between the releases have been up to 18 months. This time the new STI version will hit showrooms closer to its partner. Traditionally it's been a bit of a gap, but I expect a lot less of a gap this time – probably only a couple of months at the most."

And the new next-gen WRX STI will be coming with more power and it will be getting significant upgrades according the Australia Managing Director. But it will come with a higher price tag than the outgoing model. Senior told Motoring.au, "We launched the WRX at $39,990, 20 years ago. It's still $39,990 today – it's an incredible value for the money. But there's no doubt there's going to be substantially more kick, equipment and technology, in the new car."

The 2015 WRX STI will move the brand forward in styling and bring new designs, equipment and technology in the cabin not seen before.The new 2015 performance model will be lighter and more agile than the 2014 models. Subaru will likely make use of carbon fiber in the new roof to reduce overall vehicle weight. And the cabin will see significant upgrades to appeal to wider audience.

Subaru will keep the performance attitude of the STI, but they are moving forward to attract a new type of buyer to the WRX and WRX STI. Subaru has a goal to grow beyond the current loyal customer base, and we are already seeing it with the new 2014 Forester, XV Crosstrek Hybrid and BRZ models. Senior said, “The all-new car is charged with the task of bringing new blood to the brand. And without alienating existing customers.”

We don’t have to worry about the new WRX STI being tame and boring. We know Subaru is committed to performance and it will be alive and well in the next-generation Subaru WRX and WRX STI. Tomohiko Ikeda said at the WRX Concept unveiling in New York, “You know that Subaru is well known for its performance models and our passionate owners always want to know what we are thinking in the area. Today we will give you a message that Subaru will continue to be committed to performance products.”

Subaru Performance fans can count on Subaru to bring the next-generation WRX STI with even more power and performance than before. Look for a new turbocharged intercooled engine with more power, a lighter more agile STI model with carbon fiber body panels, and improved handling in the corners from a tuned chassis.

The 2015 Subaru WRX and WRX STI will also have a new updated cabin with new equipment and technology not seen before in the performance model. The total package will appeal to a wider audience and attract more new performance buyers to the brand. Look for the next-generation WRX STI to launch in the first half of 2014. Stay tuned to Torque News as we bring you latest Subaru news.

LG's New EV Battery Plant Is a Welcome News for Tesla
Tesla Giga Berlin's New Hurdle: It's Not Only the Gov't, but Now Tesla Itself
END_OF_DOCUMENT_TOKEN_TO_BE_REPLACED