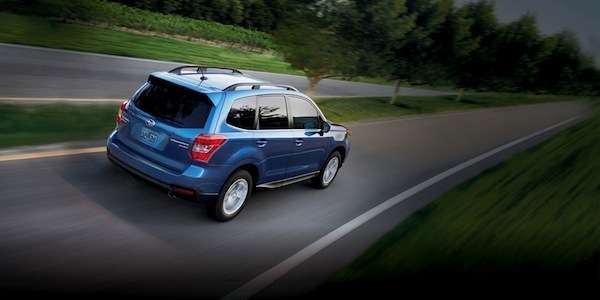 The 2015 Subaru Forester keeps blistering the pavement as the SUV contributes significantly to the company’s strong July.
Advertisement

The compact SUV has had the best month ever in sales and Subaru of America reports Forester had sales of 14,524 which represents an increase of 47.59 percent MTD. Forester leads the Subaru lineup in sales volume and outpaces the Outback and XV Crosstrek. Another new milestone for Forester in July sees the SUV achieve 12 straight months of 10,000 plus in sales for the first time. Forester has also reached 1.1 Million sales to date.

Why is Forester a big hit with buyers?

When automakers update a vehicle or give it a redesign and bring out a new generation model, they don’t always improve it enough to get the attention of the buyers they are trying to attract. But Subaru hit a home run with the all-new fourth-generation Subaru Forester. Buyers continue to flock to Subaru showrooms to buy the new crossover in record numbers. What did Subaru do to the new model?

Subaru changed everything from the ground up and gave mid-size SUV buyers what they want, and buyers continue to respond in a big way. Before Subaru made significant changes to Forester, the previous-generation model wasn’t the brands best-selling vehicle. The Outback and Impreza have been the top sellers for Subaru until now. But the new 2015 Forester is by far the brands top seller in the lineup in 2014.

Imagine an SUV with all-wheel-drive, that offers superior weight balance and maneuverability and has the ride comfort of a sedan. That is what Subaru engineers and the design team set out to accomplish when they redesigned the new-generation Forester. The design team, led by Project General Manager Takuji Dai, had a goal to boost overall ride comfort and stability of the crossover at high speeds and in the corners. Repeated runs by test drivers in various track conditions at the Fuji Speedway, helped Subaru reach their goals.

The all-new Forester offers mid-size SUV buyers superior ride comfort, weight balance, maneuverability and offers fuel economy at the top of its class. Forester performs well in all conditions from city streets, highways and back country dirt roads. Subaru hit a home run and it’s showing up with buyers responding here in the U.S. The 2015 Subaru Forester hits two significant milestones in July. The SUV has the best July sales ever and achieves 12 straight months of 10,000 plus in sales for the first time. The new-generation SUV sets itself apart from the crowd.

danwat1234 wrote on August 4, 2014 - 10:18pm Permalink
I have noticed that if the ignition is on, engine off and you press the AC button, the radiator fans come on even if the engine is cold. Turn off the AC and the fans turn off. The AC pump isn't turning since the engine is off. It surprised me that the car doesn't have the logic to save battery wear by not running the radiator fans unless needed. Does anybody know if it is possible to upgrade a Forester that doesn't come with X-mode, to have X-mode? What hardware changes are there? Thanks
Anon wrote on August 7, 2014 - 4:02pm Permalink
X-Mode is advanced VDC + CVT Lineartronic Gearbox, so not possible to upgrade a manual to X-Mode. If you want to get the Diesel, the CVT Diesel + X-Mode is coming to the UK in early 2015..... I have the XT, thirsty but awesome! :-)
danwat1234 wrote on August 8, 2014 - 3:44pm Permalink
Thanks. Do you know the changes is someone has a Forester with a CVT and stability control but no X-mode?