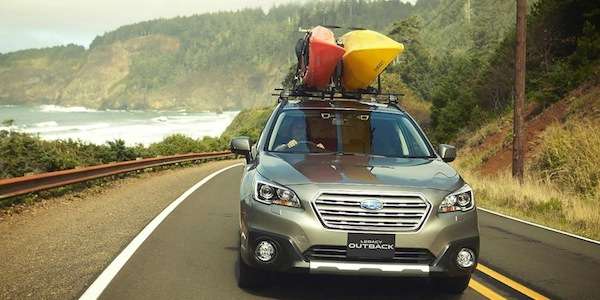 Demand for the 2015 Outback is helping Subaru hit sales targets 5 years ahead of schedule. What is the relentless demand forcing Subaru to do?
Advertisement

Subaru is red hot and the automotive story just keeps getting better for the Japanese automaker. The Subaru brand is flying high and reaching their target sales goals a full five years ahead of schedule. The 2015 Subaru Outback is a big reason Subaru is having incredible success in the North America. The Outback SUV-alternative vehicle has been redesigned for 2015 model year and dealers are selling them as fast as they can be produced.

Subaru Canada reports 2015 Outback sales in April were up an impressive 66.3 percent leading all other models and enjoyed its highest monthly sales ever. In the U.S., the new generation Outback had its best April ever and is up 21.3 percent in the first four months of the year. Subaru Of America reported Outback has seen 14 consecutive months of more than 10,000 vehicles sold.

Even before Subaru gave the Outback a complete remodel for 2015, the SUV-alternative has been gaining ground on the F-150 pickup in Colorado. Now that the new 2015 Outback SUV-alternative has arrived in dealer showrooms, Subaru can’t produce enough for buyers in the...read more.

Subaru sales 5 years ahead of schedule

How will Subaru handle the increase?

To reach these new goals, Yoshinaga said they will need to boost annual production capacity at Subaru of America’s, Indiana plant to 394,000 vehicles by the end of calendar year 2016. "If only we had more cars, we could be selling more," Yoshinaga said at the news conference. FHI will drop production of the Toyota Camry next year to make room for produce of the new Subaru Impreza in 2016.

Subaru’s plan now is for further expansion of their lineup that will include new products, better engines, more production and cost cutting. Next year, Subaru will introduce a new modularized platform called the Subaru Global Platform that will support every model from the Impreza compact to the Outback wagon. It will make its debut in the new generation Impreza and will come with improved safety, better driving dynamics and increased interior space.

The next new product for Subaru will be a seven-seat SUV geared toward the North American market to replace the aging Tribeca. Subaru will also convert all its gasoline engines to include direct injection starting in 2016. The DIT engine technology will roll out in the next-generation Subaru boxer engine.

The 2015 Subaru Outback has been a huge success for the brand and has been recognized by numerous trusted third-party organizations. The Automobile Journalists Association of Canada’s (AJAC), awarded Outback the Best New SUV under $35K, it’s a 2015 Insurance Institute for Highway Safety (IIHS) TOP SAFETY PICK (TSP) and TOP SAFETY PICK PLUS (TSP+) award winner, as well as receiving ALG’s and Canadian Black Book’s award for resale value. Outback helped blow up Subaru’s business plan, profits are up, and it’s a good problem for the Japanese automaker to have to deal with.

DNROS wrote on May 15, 2015 - 6:13am Permalink
Subaru could easily stick to its original business plan by stopping the production of most of the Outbacks and the Foresters. However nowadays, self-discipline and restraint are rare virtues to come by.