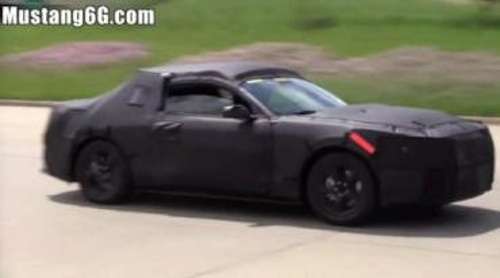 2015 Ford Mustang may not be all that new and hot

The all-new 2015 Ford Mustang may not have as radical a design as many had originally thought. What are designers saying it will look like?
Advertisement

When you have a 76 year-old retired Ford designer who says the new 2015 Ford Mustang is “new and hot” it should make us a little suspect of its new design. Jack Telnak retired from FoMoCo as its global design chief 15 years ago and was the chief designer of the 1979 Ford Mustang. He says he has seen the new 2015 Mustang and tells Edmunds, "All I can tell you is that it looks great, it's all new and it's hot. You will know it is a Mustang. There is no question about that." Is this what’s coming next year when Ford unveils the new global Mustang?

Ford has kept the new design of the 2015 Mustang under wraps and it’s been seen heavily armored in recent days with images and videos all over the internet. Edmunds interviewed a number of auto designers and all say similar things that it looks “stunning” but still looks like a Mustang. Is this going to be what launches the new 2015 Mustang to global status?

Have Ford designers been too conservative with the new Mustang?

Ford is launching the new 2015 Mustang all over the globe and it will need to appeal to a whole new generation of buyers who never grew up loving the old Mustang design. We had originally thought Ford would design the new Mustang to resemble the Evos Concept that made its debut at the Frankfurt Motor Show in 2011. But it looks like Ford caved and will back off any radical design and try to keep the old Ford aficionado’s happy. Aging Baby Boomers will be very happy, but is this the segment of buyers that Ford really needs to reach?

We know that the new 2015 Mustang will be still be rear drive, but will do away with the old straight axel and get a new independent rear suspension. And this is a good thing as it will need to be more agile in the corners. Hopefully it will also get smaller as it’s too large for the European market. Global buyers will want a sportier, smaller and more fuel-efficient Mustang if it’s going to succeed. It’s been reported that a new efficient Four-cylinder EcoBoost powerplant will be under the hood when it launches overseas. But Ford may keep a V8 under the hood for American buyers who can't let go of the past.

We could see many new special edition models coming out in the future. These will be successful in the U.S., but will global buyers be drawn to them? Designer Stewart Reed told Edmunds, "They have done a really good job the last few years with special-edition versions of the car, the Boss, the Shelby and everything," he said. "I've heard the special-edition variations are really good. They are pushing that even to a more profound level than what they have had." Global buyers want sporty, agile and efficient and may not care about all the new special edition models. It may be just to keep American buyers happy.

The new 2015 Ford Mustang design may appeal to its current audience of Boomers and Ford Mustang aficionado’s of the past, but Ford may miss the mark when it launches the new pony car around the globe. Ford will need to appeal to a much younger generation who couldn’t care less about the old Mustang roots.

The original Mustang was revealed at the 1964 World Fair in New York on April, 17. It may be likely that Ford chooses to make the global debut of the new 2015 Mustang at the 2014 New York Auto Show on April 17, 2014. All the speculation will be over and we’ll see just what the new global Mustang looks like without all the heavy armor.

Elon Makes a Cybertruck Statement With an Action, But Quiet in Words
Tesla's Record Month in China: Doubled Registrations in March 2021
END_OF_DOCUMENT_TOKEN_TO_BE_REPLACED