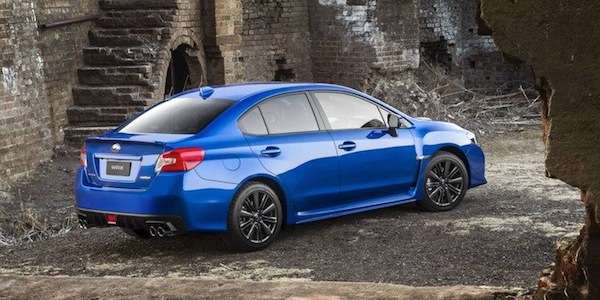 When many automakers have cars sitting on their lots and can’t move out their old models to make way for the new ones, Subaru can’t keep up with the demand for the older WRX model. WRX fans are buying up the previous generation model faster than the Japanese automaker can build them. Just ahead of the 2015 WRX dealer launch, performance fans are snatching up the outgoing model at a pace not seen in the past ten years.

The Subaru WRX was originally launched here in the U.S. in 2002, and now WRX is selling better than it ever has. Why is the previous generation moving out the doors quicker than ever? The new 2015 WRX arrives with a new body style, and a new engine. Our guess is, WRX fans aren’t sold on either one yet. They want the previous generation WRX that still has the 2.5-liter engine and the old body style.

WRX fans haven’t warmed up to the new styling, and they aren’t sure how this new smaller 2.0-liter engine is going to perform. Whenever you downsize, it’s not going to be a good thing in many performance fans eyes. Performance enthusiast always want more instead of less. Even though the new 2015 WRX with the 2.0-liter turbo has more power than the outgoing 2.5-liter powerplant, fans aren’t convinced it’s better.

Another reason why the 2014 WRX is selling like crazy, is because Subaru dropped the 5-door hatch body style in 2015, and the 2014 model is the last year for the hatchback. Buyers are wanting the WRX hatch, and know it’s not available on the new model. The hatch will be back on WRX, but not for a couple years until Subaru can get production of their new 2015 Legacy and Outback models ramped up.

People don’t like change and its showing up in 2014 WRX sales in a big way. Does Subaru need to be worried that the 2014 models are setting a ten-year sales record? I can tell you that Subaru and parent company FHI aren't worried at all. The new-generation model is just about to hit Subaru showrooms, and even though they haven’t seen many pre-orders for the new performance sedan yet, when the 2015 WRX arrives, it will sell like crazy. Look for the new-generation 2015 Subaru WRX to be a big hit with performance fans when they see it, touch it, and drive it. Stay tuned to Torque News for the latest WRX and WRX STI news.