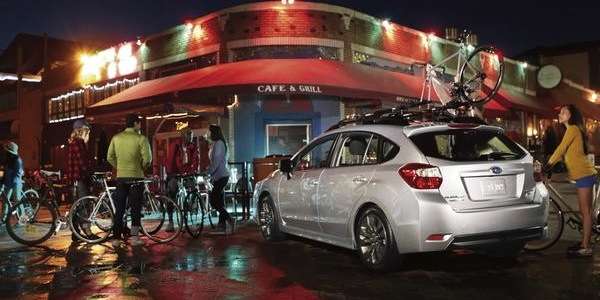 Subaru is moving up in brand recognition in the U.S. market and has received an award for the 2014 Subaru Impreza. Subaru has captured two of the top ten spots on Consumer Reports “coveted” Best Bets list and one was the all-new 2014 Impreza.
Advertisement

Subaru is moving up in brand recognition in the U.S. market and has received an award for the 2014 Subaru Impreza. Subaru has captured two of the top ten spots on Consumer Reports “coveted” Best Bets list and one was the all-new 2014 Impreza. Impreza was picked by CR to be on the list from more than 260 vehicles tested. This week we’re testing a 2014 Impreza 2.0i Sport Limited ($23,195) and we’ll see if it’s a good choice for consumers.

Subaru is attacking the small-sedan market in a big way with the new 2014 Impreza, and their making a challenge to the new Honda Civic EX, Hyundai Elantra GLS and Mazda3 iTouring sedans. Subaru is a brand that is growing quickly, especially here in the U.S., as new millennial buyers are attracted to the brand for reasons that the new Impreza provides. It’s fun to drive and offers buyers a feeling of confidence with its Symmetrical all-wheel-drive.

The 2014 Impreza carries over pretty much unchanged, but gets some new convenience and technology upgrades for 2014. Impreza gets a new rear vision camera that comes standard on Limited models. Aha smartphone integration is also included for 2014 with the optional navigation system for all 2.0i Premium, 2.0i Limited and 2.0i Sport Limited models.

The Impreza received new styling for the 2002 model year and it was a big change for the more conservative Japanese automaker. This new Impreza body style is possibly the most stylish car Subaru has ever produce. The outside may have changed, but the architecture underneath still remains true to Subaru’s core values. The 2014 Subaru Impreza is still powered by a four-cylinder boxer engine and comes standard with full-time all-wheel-drive that follows faithfully in the Subaru tradition and what has made the brand successful. Subaru is reaching out to brand-new buyers with its well-styled looks, but continues to appeal to its traditional buyers on the basis of its sturdy, capable all-weather characteristics.

What sets Impreza apart from the competition?

The 2014 Impreza comes with fuel economy compared to two-wheel drive compacts, but with the benefits of Subaru’s Symmetrical full-time All-Wheel drive. Impreza received a 36-percent leap in fuel efficiency over the previous generation model and now gets an EPA-estimated 27/36 city/highway mpg with the new Continuously Variable Transmission (CVT) that this model came equipped with.

We tested the Impreza five-door hatchback that is handy for carrying cargo and easy loading with the hatch. Once inside, Impreza has an open stylish feel, and the large windows gives the driver good visibility. Impreza is an economy car and materials and fit and finish is what you would expect from this price point ($23,195). The dashboard cover and switchgear are done with very nice soft-touch materials that give them a more expensive feel.

This 5-door test car, with rear seats lowered flat,delivers a generous 52.4 cubic feet of cargo room. Many buyers are young active millennials and this fits perfect for carrying camping equipment or snowboards. The Sport also includes a roof rail up top for carrying a kayak, surfboard or mountain bike.

This is a comfortable, well-furnished interior, fully in keeping with Subaru's down-to-earth practicality. The Impreza Sport is a bit more upscale and comes with leather trimmed seats, the all-weather package with heated front seats and the rear view camera as standard features. It will appeal to new buyers well beyond the Subaru faithful.

What are the benefits of the Impreza’s all-wheel-drive? Denver, Colorado, where we tested the new Impreza this week, is the ideal testing ground for the Symmetrical all-wheel-drive system the Impreza comes standard with. We had a substantial snowfall this week that gave us ample opportunity to try out the Subaru system. This writer lives at 8500 feet elevation in the foothills west of Denver. On a morning commute to work, the Impreza felt completely stable and secure as I pushed it to the safe limit on the snow-covered Interstate. At highway speeds on snowy and icy roads, the compact five-door navigated the roads without slipping and I felt secure in all situations.

As I got into the city, the roads were completely snow-packed and slick. On one hill close to work, I could see it was glare ice and this hill is a common problem where many people get stuck before the road gets sanded. That was the case on this cold snowy morning. In fact, the week before, a neighbor had slid down the hill and wiped out a number of bushes as he tried to stop his vehicle. I turned the corner and stepped on the gas to get up the hill. The Impreza went up without slipping or sliding. This car came equipped with lower-profile Yokohama all-season tires, but it went right up the icy street.

Impreza uses an Active Torque Split AWD system that is mated to the Lineartronic continuously variable transmission (CVT). An electronically managed continuously variable transfer clutch actively manages torque distribution in response to driving conditions, acceleration, deceleration and cornering. Slippage at the front or rear wheels causes torque to transfer (up to 100%) to the opposite set of wheels. This is not only advantageous in wet and slick conditions, but also works well on dry roads.

The 2014 Impreza Sport comes with a new 2.0-liter four-cylinder boxer engine, downsized from the previous-generation 2.5-liter powerplant. The 2.0-liter engine produces similar power and performance, while increasing fuel efficiency by a massive 36 percent. The engine produces 148 horsepower and 145 pound-feet of torque which sounds minimal, but the new-generation model had a 165-pound weight decrease over the previous model which helps performance. And with the CVT, this tester had plenty of power to pull steep hills at altitude.

The Impreza Sport comes with steering wheel paddle shifters that allows for more spirited driving. The CVT automatic features a console gearshift lever and you can paddle shift in the fully automatic mode. But if you want absolute paddle-shift control of the transmission, you merely move the gearshift lever to the left. The CVT then holds that gear until you select another higher or lower. The paddle shifters were helpful downshifting into corners in the wet snow. The new Lineartronic CVT is more advanced from previous models and the technology is much improved. A five-speed manual gearbox is also offered on the new Impreza for even sportier driving dynamics.

The Impreza's cornering and stability at higher speeds in the corners is surprisingly good. The suspension keeps the car flat and stable. However, when taken to its cornering limit, a large amount of body roll takes place. Most people won’t be driving it like its WRX sibling, but it’s nice to know you can maneuver at high speeds.

The 2014 Subaru Impreza 2.0i Sport Limited five-door hatchback is a good compact car that features fuel economy compared to two-wheel drive compacts, but with the benefits of Subaru’s Symmetrical full-time All-Wheel drive. It is more comfortable inside than expected, and embodies all of the admired practicality that has made Subaru among the most owner-loyal brands anywhere. With 95 percent of Subarus sold in the past 10 years still on the road, this Impreza Sport would likely remain in the family for many years.

J wrote on March 2, 2014 - 1:57pm Permalink
Bought a 2014 Sport Limited Impreza yesterday :D. Diggin' it.
Simon wrote on March 2, 2014 - 11:28pm Permalink
The only downsides to the car are the cheap body parts (body panels are flimsy and expensive to repair, the door feels like its made of nothing but plastic) and the worst tires known to man; but that's the sacrifice you make since awd is expensive. Some reviewers say the tires last less than 10k miles and a re downright dangerous in rain and snow.
Aaron Turpen wrote on March 3, 2014 - 11:38am Permalink
I just finished a press review of the 2014 Impreza Sport a couple of weeks ago. After a week in the car, I was impressed, but Simon is right that it has a cheaper feel to it than it used to and I never saw anything like the 36mpg claimed for highway mileage on the car. It's a right-sized family car with good capability in the snow and ice, though.
Sandy wrote on March 4, 2014 - 8:18pm Permalink
I love my Impreza, I take all my four dogs with me all the time. I lay the back seats down, they lay flat Yea! There is tons of room for everybody. Anyway it is amazing every day, looks sharp runs like a dream. When the weather was bad with snow. I was able to go up hills when other people were slipping and a sliding. I felt pretty smug. I feel safe in my car and feel like I get good gas mileage. It is 2013 really nice shiny black. I love my car!!