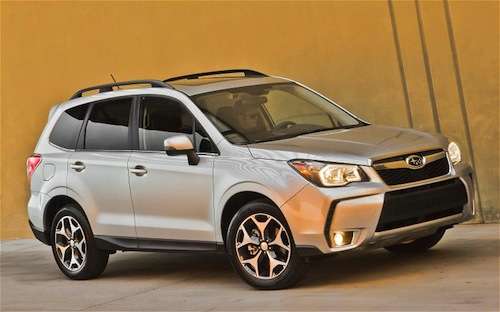 Carsguide takes the new 2014 Forester and rates it against the 2013 Toyota RAV4, 2013 Honda CR-V and 2013 Mazda CX-5. See who the Australian road tester picked as the top mid-size crossover.
Advertisement

In the new crop of medium-size SUVs who would come out on top in a comparison test? In the highly competitive segment, the new 2014 Subaru Forester, 2013 Toyota RAV4, 2013 Honda CR-V and 2013 Mazda CX-5 are all in the mix for buyers looking for a new mid-size crossover. In yesterday’s edition of the The Daily Telegraph’s Carsguide, Paul Gover, Australia’s most experienced and respected road testers, revealed test results of the new Forester, RAV4, CR-V and CX-5. With the four vehicles so close in comparison, is there a clear winner in the segment?

The Forester comes out on top

According to Paul Gover, there is a clear winner and he picks Subaru’s new fourth-generation 2014 Forester ahead of the new crop of medium SUVs in a comparison published in yesterday’s edition of Australia’s The Daily Telegraph’s Carsguide. Carsguide is the biggest automotive classified brand in Australia with the largest reaching audience nationally in over 130 newspapers, online, mobile and iPad app. It is well-respected with a strong reputation in the automotive industry for reliability, and knowledge.

Gover, one of the leading automotive journalists, rates the all-new Forester ahead of the pack. He gives the Forester four and-a-half stars, versus RAV4’s four, Honda CR-V’s three and-a-half and Mazda CX-5’s three. The new 2013 Toyota RAV4 is the closest competitor and was just launched the same week Gover published his results. The press release by Subaru Australia gives his comments on the new RAV4 and clearly rates the Fourth-generation Forester ahead of the RAV4. His comments on the Honda CR-V and Mazda CX-5 weren’t available, but he clearly rated the new Forester ahead of both.

The fourth-generation RAV4 has also been completely redesigned and gets new styling with a sleek-sloping roofline and aggressively sculpted front and rear fenders. Contemporary buyers are looking for more than just a functional design and want something that has a fun character. Toyota has definitely moved the new 2013 RAV4 in that direction. But how does it compare to the new Forester?

Gover’s verdict on RAV4: “Plenty of improvements but it’s not as good as the Forester and the diesel tow rating will be a deal breaker for a lot of people.” On driving, Gover says that while RAV4 has improved “…it can’t match the improvements in the latest Subaru Forester, which is sublime in the ride and feels roomier inside.”

On ride, he says RAV4 is “disappointing.” He adds: “The RAV4 is almost certain to become the sales leader in its class but, for me, it’s not as good as the new Forester.” Other points of difference include RAV4’s lack of a five-star ANCAP rating for occupant safety (it has yet to be tested), use of a space-saver spare wheel and a low 500 kg towing capacity for diesel RAV4 (versus Forester diesel’s 1800 kg).

The all-new 2014 Subaru Forester has been completely rebuilt from the ground up, and it looks like Subaru has another winner to go along with the new Subaru BRZ and XV Crosstrek. The Toyota RAV4, Honda CR-V and Mazda CX-5 according to Gover, can’t match the new Forester’s safety, tow rating, ride quality and roomy interior. The new 2014 Forester is set to launch this spring.

Anonymous wrote on February 23, 2013 - 11:59am Permalink
Compare the standard engine then get back to me.

Tesla Contemplates A New Strategy for China Retail even As Sales Boom
Jay Leno on Elon Musk & EVs: “I Think He Should Get ... Credit"
END_OF_DOCUMENT_TOKEN_TO_BE_REPLACED