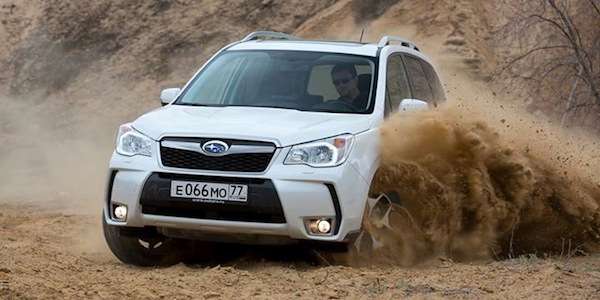 2014 Subaru Forester is getting hot in frigid cold Russia

The Russians are coming and they are very impressed with the 2014 Subaru Forester.
Advertisement

This is an award from the newspaper that says the winner should possess the most advanced technical, dynamic and best consumer characteristics in its class. The 2014 Subaru Forester walked away with this distinction and beat the others in its class.

The award "Golden Horn" was established in 2001 by the Russian newspaper, and is awarded to the best-in-class vehicles-beginners who participated in drafting the tests during the year. Forester is sold in the frigid country and sold by Subaru Russia along with the XV, Outback, Impreza, Tribeca, Legacy, WRX STI and BRZ models.

Subaru has never won the prestigious Russian award before and Forester earns the first from the newspaper “horn.” CEO of the company "Subaru Motor" Ichimura Iosiaki, said: "For us, this award is a tremendous value, primarily because it is the first for Subaru" Golden Horn "in the history of our brand in the Russian market."

Forester has been getting awards all over the globe and this one from Russia is the latest of many. 2014 Forester just received another award in Scotland last week. Motoring editor of Motors North, the automotive supplement covering the whole of northern Scotland, voted the new 2014 Subaru Forester, best SUV in its 2014 Highland Car of the Year Awards.

Forester is no stranger to awards. Since its launch, Forester has piled up more awards than almost any other mid-size SUV on the planet. It was just recently named UK’s Mid Range SUV of the Year by 4X4 Magazine. In the U.S., the 2014 Forester was named Best SUV in the Yahoo Autos Car of the Year awards.

There are many reasons the Forester is such a big hit with the automotive media any buying public, but three stand out why Forester is so popular. Subaru has stayed true to their core values that have made the Forester a success. Forester started with the qualities of good visibility, cargo carrying ability and versatility. It has remained true to those core values for 15 years. Subaru knows a simple truth, if it’s not broken, don’t fix it.

In Subaru’s largest market, the U.S., the 2014 Forester is the top selling vehicle in the lineup. Now in Russia, the Forester is getting hot and will likely be a top seller where its all-wheel-drive capabilities will be ideal.

Ahmed wrote on May 24, 2014 - 10:46am Permalink
Its quite surprising to know that Cherokee is in the first chioce. There is nothing against it, but it is usually preferred by off-road segment lovers. And of course Fiesta has to be in the selection with its user friendly technologies and Features.