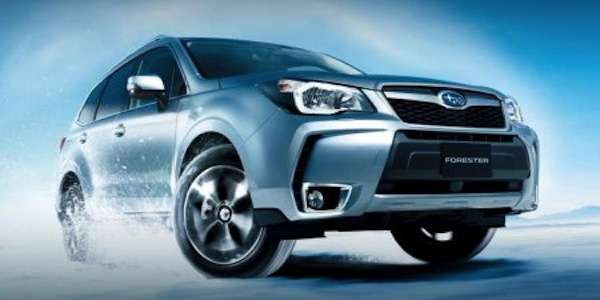 What in the world is Subaru doing to impress the Scottish? The Scottish press is very impressed with Subaru’s two top selling models, the 2014 XV Crosstrek and 2014 Forester. We reported here earlier in the week that the 2014 XV received the Crossover of the Year award from Press & Journal newspaper in Scotland. Now in less than a week, the new 2014 Subaru Forester picks up an award from the editor of Motors North.

These are two of Scotland’s biggest selling regional newspapers, and they can’t say enough good things about Subaru. The two regional newspapers are the best-selling papers in Scotland and they have recognized Subaru’s SUV and All-Wheel drive expertise for both the XV and new Forester.

Earlier this week, the Press & Journal newspaper, voted the 2014 Subaru XV its “Crossover of the Year” award and said, “The XV is a smart looking crossover that offers the best all-wheel drive system in its class and charismatic engines. Recent changes to pricing now make it one of the more affordable choices in its sector and it remains one of the capable and secure when the weather turns nasty. It looks good, is a reasonable size, it drives well and it will undoubtedly be very reliable.”

Now just a few days later, the motoring editor of Motors North, the automotive supplement covering the whole of northern Scotland, voted the new 2014 Subaru Forester, best SUV in its 2014 Highland Car of the Year Awards. What is the publication saying about the newly-redesigned SUV?

In giving the Forester top spot, Motors North said: “The new Forester makes far more sense for the majority of buyers than large off-roaders. By using its rich engineering base, Subaru has developed a range of high efficiency engines that are remarkable for their power, economy and low emissions. The new model is better to drive and more agile than its predecessor but retains its frugal character and offers a spacious interior and intelligent 4x4 system on all models”.

Forester no stranger to awards

The 2014 Forester is no stranger to awards. Sincs its launch, Forester has piled up more awards than almost any other mid-size SUV on the planet. It was just recently named UK’s Mid Range SUV of the Year by 4X4 Magazine. In the U.S., the 2014 Forester was named Best SUV in the Yahoo Autos Car of the Year awards. Why is Forester continuing to pile up awards?

There are three reasons the Forester is such a big hit with the automotive media any buying public. Subaru has stayed true to their core values that have made the Forester a success. Forester started with the qualities of good visibility, cargo carrying ability and versatility. It has remained true to those core values for 15 years. Subaru knows a simple truth, if it’s not broken, don’t fix it.

In the space of a week, Subaru has collected more independent media awards for two of its best-selling models, the XV Crosstrek and now the new Forester. They have been recognized for their power, economy, utility and all-wheel-drive capability. It sounds like Subaru XV and 2014 Forester will be a big hit with buyers in Scotland.