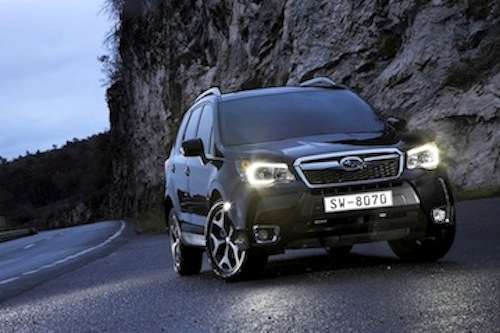 Subaru Canada has released sales figures for March 2013 and the next-generation 2014 Subaru Forester is propelling sales to new records.
Advertisement

The all-new fourth-generation 2014 Subaru Forester is the newest reincarnation of the Forester line and is already having a big impact on Canadians. They have come to know the Forester for it being a safe, versatile, and all-weather capable all-wheel-drive SUV. The 2014 Forester ia already making itself known and has catapulted sales to new heights. Just how important is the new 2014 Forester to Subaru in Canada?

Subaru Canada, Inc. (SCI) has announced that March 2013 sales are the best in company history. The Japanese automaker has reported 3,117 units sold in March which marks the company's best month ever. With sales up 11.7 percent over the same month last year, Subaru's record March also propelled first-quarter results into record-breaking territory with an increase of 3.8 percent. Why is Subaru seeing such fantastic growth in Canada?

The next-generation 2014 Subaru Forester arrived in dealerships earlier this month and catapulted sales to new heights with 1,003 units retailed. That is a huge increase of 64.2 percent over last March. Subaru redesigned the Forester and Canadians are responding in a big way. The 2014 Forester made its debut in Canada with new exterior styling, a roomier interior, improved fuel economy and a new turbocharged 2.0-liter engine.

The new Canadian Forester comes with an all-new 2.0-liter direct-injection turbocharged Boxer engine producing 250 horsepower and 258 lb ft of torque. It will also come with a new intercooler for increased performance. The new 2.0-liter will replace the outgoing 2.5-liter horizontally opposed turbocharged four-cylinder engine in the Forester 2.5XT model. The evolution of the Forester also continues with X Mode for off-road fun for Canadians who lead active lifestyles.

The BRZ, Subaru's rear-wheel-drive sports coupe, also continued to perform well with March results up 63.1 percent above target. Canadians have responded well to the new BRX rear-drive sport coupe. The new BRZ has been praised for its excellent handling because of the low-center of gravity. The Boxer engine design sits low and gives the BRZ a sports car driving experience like that of vehicles three to four times the price.

Subaru is experiencing strong sales around the globe because they have found their niche. They are giving buyers what they want and they listen to consumers. "By listening to our customers, we're able to deliver smart alternatives designed to delight more and more Canadians," said Shiro Ohta, president and CEO of Subaru Canada, Inc. "Last year was our best one ever and we're picking up the momentum this spring. Achieving a new all-time monthly record and momentous first quarter after a groundbreaking year is an exceptional milestone that can be attributed to enhanced product, dealer dedication and increasing consumer confidence in the Subaru brand."

Subaru has the highest predicted resale value for the 2013 Subaru Impreza, Outback and the all-new 2014 Subaru Forester is already helping the brand gain more traction with Canadian buyers.