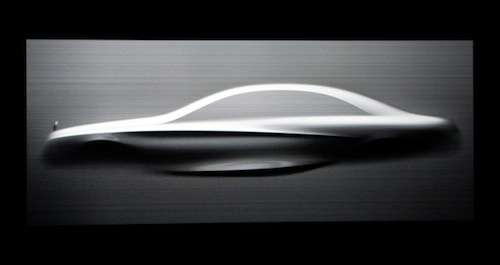 The 2014 Mercedes-Benz S-Class will be previewed with a unique artistic ‘Aesthetics S’ sculpture at the 2012 Paris Auto Show.
Advertisement

Mercedes-Benz will give us the first glimpse of the all-new 2014 S-Class at this month’s 2012 Paris Auto Show. The German carmaker will be unveiling a unique sculpture at the event to give us a preview of the luxury saloon. The artwork is called ‘Aesthetics S’ and will include a stunning solid sculpture and projected light show that was all developed by a Mercedes design team.

The Mercedes-Benz S-Class has been the benchmark for luxury sedans since the 1930s and the top-of-the-range model represents “a symbol and role model for the motor car.” The German automaker plans to reveal the new 2014 S-Class through the expression of art to better express the future of the exterior of the luxury saloon.

"The characteristic lines of the S-Class have always represented the expression of automotive culture, as we understand it. The new S-Class will continue this tradition and, with its striking lines, will put a face to our design philosophy over the coming years", explains Gorden Wagener, Head of Design at Mercedes-Benz Cars.

The 2014 S-Class should be slightly bigger than the previous generation model and will likely have an updated interior. And while Mercedes has not released powertrain details of the new luxury sedan, the S63 AMG version is expected to get a new twin-turbo 5.5-liter V8 with added horsepower. We can also expect Mercedes-Benz to outfit the new 2014 S-Class with the latest technology like a road-scanning active suspension and autonomous driver assist.

Mercedes will use the "Aesthetics S" work of art" to show the auto world the same timeless design of the S-Class that has existed for decades, and that it will continue on and will set the scene for the all-new 2014 Mercedes-Benz S-Class.

Tesla Contemplates A New Strategy for China Retail even As Sales Boom
Jay Leno on Elon Musk & EVs: “I Think He Should Get ... Credit"
END_OF_DOCUMENT_TOKEN_TO_BE_REPLACED