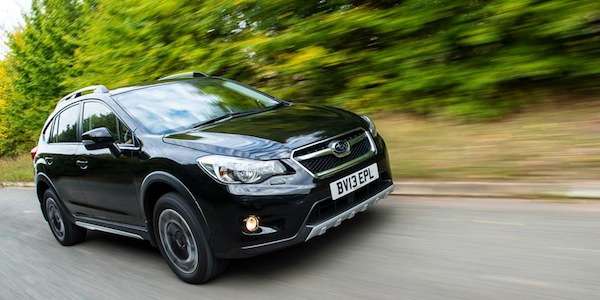 Subaru has reported record sales of 44,479 vehicles for March 2014. The new 2014 Subaru Forester and 2014 XV Crosstrek are advancing the global attack.
Advertisement

If there was a war going on, Subaru would be destroying the enemy with two secret weapons. Well, maybe they aren’t really a secret, but bombs are exploding at Subaru and the 2014 Forester and XV Crosstrek are at the heart of the explosion. It’s getting to be the same story from Subaru month after month. Record sales for the past 28 months is nothing to sneeze at and Subaru is the cats meow among all automakers. How do they keep doing it month after month? Does Subaru have a special forces division working behind enemy lines?

The all-new 2014 Subaru Forester and 2014 XV Crosstrek are big reasons for Subaru’s latest success. Both Forester and XV Crosstrek saw their best-ever month’s in March. The Forester was completely redesigned for the new-generation SUV and XV Crosstrek is a new model for the Japanese brand. If Subaru does have a special forces, it has to be their creative team of engineers who are designing great cars.

Subaru is a small automaker compared to the big auto giants, but they are advancing their machines on a global level. Subaru Global just announced record sales for the month of March in the U.S., Canada and also China. It’s no surprise that Subaru is doing well in their largest market which is North America, but they are growing in China. They are doing it in the largest auto market in the world with their two secret weapons, Forester and XV.

In the U.S., Subaru reported record sales of 44,479 vehicles for March 2014. This is an increase of 21% over the March 2013 sales of 36,701 and means the company has now set consecutive monthly sales increases for the past 28 months. It’s also Forester and XV Crosstrek here in the U.S. that contributed significantly to the automakers strong March sales and also its performance so far in 2014. Subaru saw first quarter sales of over 100,000 for the first time. And Forester and XV were the top sellers in Canada where they also saw record numbers in March.

And Subaru isn’t done bringing out new models. They are set to launch the all-new 2015 Legacy sedan later this year. “We are delighted to have once again delivered record results” said Thomas J. Doll, president and chief operating officer, Subaru of America, Inc. “2014 looks already set to be our seventh year of consecutive sales growth, with more new product to come”

If the other automakers feel like they are under attack, it’s coming from Subaru’s two secret weapons. The 2014 Subaru Forester and 2014 XV Crosstrek are launching a global attack. Subaru is not only winning the battle, they are winning the world war. And they are reloading their arsenal with new weapons.

Other 2014 Subaru Forester and XV Crosstrek stories of interest.