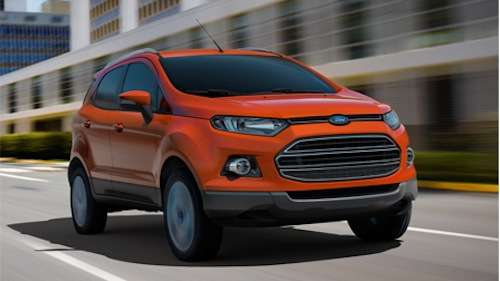 Ford is advancing around the globe and the all-new 2014 Ford EcoSport is leading the way introducing the brand to new-to-Ford customers in Asia at the 2013 Bangkok International Motor Show.
Advertisement

If you haven’t been watching Ford lately, they are advancing their brand around the globe with new engine technology and by bringing out new vehicles like the global 2014 Ford Fiesta and the all-new 2014 Ford EcoSport. Ford will be introducing the new EcoSport to a new generation of Asian buyers who are new-to-Ford. Visitors to the 2013 Bangkok International Motor Show will be greeted at the Ford stand by a dynamic display of the company’s commitment to capturing even more of Thailand’s rapidly expanding small car segment.

Along with the new EcoSport, the Ford display will also feature their EcoBoost engine technology with it’s small fuel-efficient turbo engine, and interactive displays which will highlight Ford SYNC and let visitors take a (photographic) dream journey in an all-new EcoSport. It will also include exclusive deals during Show dates that will include 0% interest on the class-leading Ford Fiesta that is the best-selling small car in Europe.

A new generation of buyers for Ford

The Asian region is expected to grow by huge margins in the next decade, and Ford is poised to take advantage of the growth opportunity. The new 2014 Ford EcoSport will lead the way and Ford is expecting 60-70 percent of its global sales growth to come from the Asia Pacific region in the next decade. Ford will use the Bangkok Show for the ASEAN reveal of the all-new Ford EcoSport compact SUV and introduce the crossover to a new generation of buyers.

The 2014 EcoSport will help Ford launch the brand in the Asian Pacific market. “This sporty, compact SUV will not only allow Ford to enter another new segment in ASEAN, it will help to define a whole new vehicle segment for the ASEAN region,” said Matt Bradley, president, Ford ASEAN. “The EcoSport is an urban SUV that blends the flexibility and spaciousness of an SUV with the agility, affordability and fuel efficiency of a compact car.”

Ford is one of the most aggressive automakers in the world, and is stepping up to the plate by building a new $450 million, state-of-the-art manufacturing plant in Rayong Thailand where the new EcoSport will be built. The new EcoSport will be a global vehicle that will be also be sold in Europe, China and Africa. It will be powered by an array of powertrains including the new 1.0-liter three-cylinder EcoBoost engine.

The award-winning 1.0-liter EcoBoost engine is making its Asean premiere at the Bangkok Motor Show, and in addition to the new EcoSport, Ford will give visitors a glimpse into their advanced engine technology. Even though it’s the smallest engine in its class, the three-cylinder EcoBoost produces power, torque and refinement, and uses Ford’s racing technology to deliver an unmatched combination of performance and fuel efficiency.

Visitors to the show will also be treated to an interactive display called “The EcoSport Urban Adventure” at the Ford stand in which they can take the all-new EcoSport “on the adventure of their dreams.” The feature will take would-be travelers on an urban discovery to a dream destination within seconds through the use of digital photography. Visitors can take the EcoSport of their choice, and the images generated can be shared online with friends, or kept as souvenirs of the show.

Ford is advancing rapidly around the globe, and the all-new 2014 Ford EcoSport along with the all-new Ford Ranger, new Ford Focus and Europe’s best-selling Ford Fiesta will be a major part of their growth strategy in the Asian Pacific market. The new EcoSport launch in Asia will help Ford appeal to a new generation of global buyers who have never purchased a Ford product before.