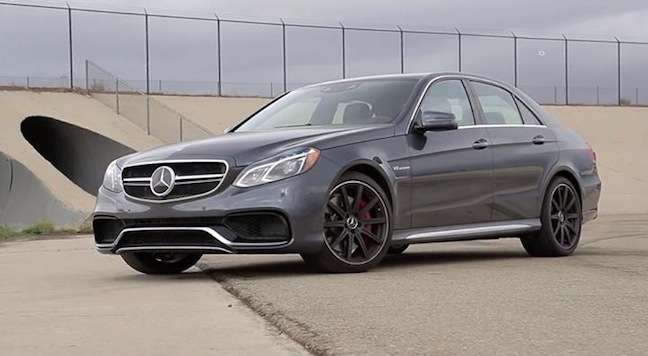 Both German cars are based on luxury sedans but have V8 engines with twin-turbos and massive amounts of power and torque. The all-new 2014 Mercedes-Benz E63 AMG S-Model 4MATIC Sedan squares off against the 2014 BMW M5 Competition and it’s a shoot out. But is there a clear winner?

Both German cars are extreme performance supersedans and demand respect when you see one coming in the rearview mirror. It’s called “uberholprestige” in German, and it means they earn the right to pass you on the Autobahn. If you see one coming flashing their lights, you better move over and get out of their way.

Jonny Lieberman and Mike Shaffer from Motor Trend took the two extremely potent hyper sedans and gave them a thorough test on a canyon road and on the dyno. Between the two, they produce 1152 horsepower and 1092 pound-feet of torque. But that’s on paper and may not actually tell the whole story. So, they also took them for some dyno testing at K&N engineering in Riverside California to see what’s really up.

Both were identical in breaking, 60-0 mph braking in 106 ft. But one true test of a supersedan is how it handles in the corners. Both mid-size high-performance luxury sedans were close in performance, but one came out ahead in the minds of the two drivers. Which one is the winner?

Jonny Lieberman and Mike Shaffer from Motor Trend, both thought the 2014 Mercedes-Benz E63 AMG S Model was the clear winner in power, performance and overall driving dynamics. But the 2014 BMW M5 Competition wasn’t far behind. Which car would you buy?