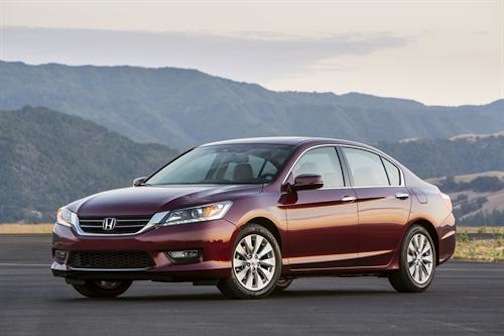 Is 2013 Honda Accord back as best sedan in America?

Many loyal customers say the Honda Accord has become boring and is no longer the best sedan in America. But according to Kelly Blue Book, the 2013 Accord and the 2013 Honda Civic are the best sedans in America under $25,000 in their respective categories. The Honda Accord has been known in the past for its high resale value and as a reliable family sedan here in the U.S. But in recent years the Accord has fallen on hard times and has slipped in popularity with many longtime loyal customers. Kia, Hyundai, Nissan and of course Toyota are giving it stiff competition, but are we seeing the Honda Accord make a comeback?

If we can believe KBB, the 2013 Honda Accord and 2013 Civic are both the top ranked vehicles in their respective categories in their “10 Best New Sedans Under $25,000.” And the 2013 Honda Accord was the top ranked vehicle on the list of new vehicles introduced in 2013 compiled by the auto experts at KBB.com. The new Civic was the top rated compact car on the list. KBB.com applauded the Civic for its revised interior and exterior styling along with an impressive list of standard features.

Is Honda making a comeback?

Those are high honors for Honda and it could signal that Honda is making a comeback after they slipped from being the perennial sales champ and comparison test winner a few years ago. KBB has given the newly redesigned Honda Accord and Civic highest rankings over the popular 2013 Volkswagen Passat and Jetta, 2013 Nissan Altima, Toyota Camry, Kia Optima, Ford Fusion and all-new 2014 Mazda6.

KBB is saying that the totally redesigned Accord has been “deeply redefined” enough and has a newfound sense of sporty styling and is a cool car with its new technologies. They have praised the Accords driving performance and innovative features, like the available LaneWatch blind spot display. The new Accord also gets top industry-leading safety scores from the IIHS and NHTSA. That’s quite a shift from recent customer comments calling the Accord boring and unreliable.

Honda making a strong push to be on top again

Honda seems to be working hard to restore the image they once held with their loyal customers. "Nothing beats the value Accord and Civic offer customers" said Mike Accavitti, senior vice president of auto operations at American Honda. "Both models deliver on all fronts – value, performance, fuel efficiency, top safety ratings and a wide array of standard features – all at a competitive price point."

As the top ranked models on the list by KBB, the 2013 Accord and Civic seem to be making a strong push for the top spot they once held. But is it enough to bring back customers who have switched to brands like Kia, Hyundai, Volkswagen and Mazda? KBB seems to think so and have given the Accord and Civic a big vote of confidence.

"While other mid-size cars have threatened its dominance, now we can definitively say that the Accord is back on top, with the completely overhauled 2013 model hitting No.1 on our list of the '10 Best Sedans Under $25,000'," said Jack R. Nerad, executive editorial director for Kelley Blue Book's KBB.com. The new 2013 Honda Accord and Civic appear to be back. Are there any previously loyal customers who left Honda out there who will make the switch back?