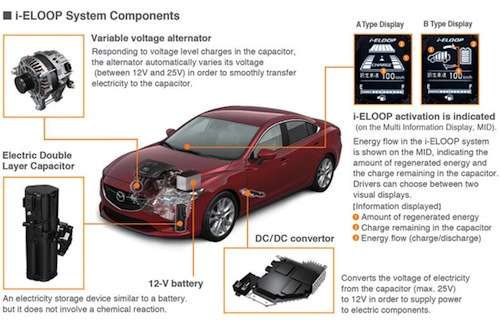 The new 2014 Mazda Mazda6 will feature a new brake energy regeneration system that will achieve the best fuel economy of any gas-powered mid-size sedan in America.
Advertisement

The new 2014 Mazda Mazda6 equipped with i-ELOOP could be a game changer for the Japanese automaker. The new mid-size sedan will be the first Mazda to feature a technology that will increase fuel economy as it uses the brakes to recapture energy. The 2014 Mazda6 when equipped with the new i-ELOOP (Intelligent Energy Loop) will achieve best-in-class fuel mileage for a non-hybrid mid-size sedan. Just how much of a difference will the new system make?

Mazda has just announced the Mazda6 will achieve best-in-class fuel economy with an EPA-rated 28 city/40 highway/32 combined mpg.  When not i-ELOOP-equipped, the 2014 Mazda6 still achieves class-leading highway fuel economy at 38 mpg. The two mpg increase changes the game for Mazda as they develop more fuel-efficient cars.

How does the system work?

The system uses the cars brakes as it decelerates and converts the kinetic energy into electricity. That energy is then stored for later use to power the vehicle's headlights, climate control and audio systems. This saved energy reduces the need for the cars engine to burn fuel in order to power these systems. This improves overall fuel economy by 2 mpg. The captivator-based brake energy regeneration works continuously and the driver doesn’t even notice.

How much will Mazda6 i-ELOOP cost?

The new fuel-saving system will be available on Grand Touring models ($29,695), i-ELOOP will be part of the new GT Technology Package ($2,080). The system should be well worth the additional cost as it increases fuel mileage by 2 mpg. And for the additional $2080, it will also include a number of other safety features that includes Lane Departure Warning System, High Beam Control, Mazda Radar Cruise Control and Forward Obstruction Warning, a Sport mode button and active grille shutters.

Fuel efficiency when mated with the manual transmission for non-i-ELOOP cars is EPA rated at 25 city/37 highway/29 combined mpg and increases to 26 city/38 highway/30 combined mpg with the automatic. This still gives the Mazda6 class-leading highway fuel mileage. The new Mazda3 which was just revealed in New York will be the next Mazda to get the new i-ELOOP technology.

The new 2014 Mazda Mazda6 equipped with i-ELOOP is “changing the game of automotive engineering.” With the addition of the new technology, the new Mazda6 will achieve the best mileage in America for a non-hybrid midsize sedan.  That could be a game-changer for Mazda as consumers look for the most fuel-efficient mid-size sedan.