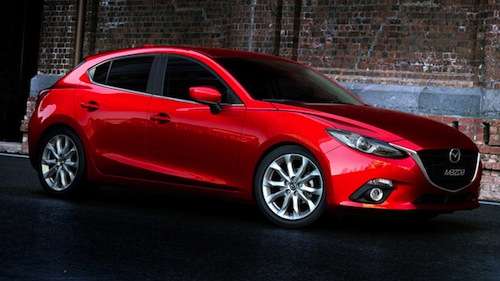 Mazda reveals the first video of the all-new 2014 Mazda3 when it was unveiled behind the scenes in New York and four other locations around the globe.
Advertisement

The 2014 Mazda3 was revealed with a splash last week but not just in one location like most automakers when they introduce a new car. The all-new Mazda3 was unveiled in five different locations around the globe on the same day. Mazda has big global plans for the completely redesigned and re-imagined third-generation model. Mazda has released the first video of the New York reveal and the first ad of the all-new four-door compact in Japan. Both videos are included below.

It all started on Wednesday when the new Mazda3 was revealed in five different locations around the globe on the very same day. The global debut kicked off in Melbourne, Australia under the theme, “conviction creativity and courage,” where a live CAD demonstration highlighted the cars styling.

Next the newly redesigned compact was revealed in St. Petersburg, Russia where French product and interior designer Kito Morivito talked about the interior of the Mazda3. It moved on to Europe where the car was introduced in London, England where the cars SkyActive technology was highlighted featuring the small sedans performance and high mileage.

Next up was Istanbul, Turkey where a special technology reveal with Aha conductivity and infotainment featuring the cars technology. Finally the car was revealed in New York to the U.S. auto press where expectations were high and we caught first sight of the new Mazda3. Mazda says the new car is “more luxurious, more efficient and more intuitive.” It certainly looks like Mazda has hit its mark.

Jenkins said, “There are three basic design elements to KODO, first there is the speed element of the car which is the silhouette of the car. The next key element is tension, and the tension refers to the lines on the hood and how the front fender lines taper through the back and of course the rear shoulder line really adds a lot of that muscle to the car. Lastly we use a term called allure which is really about the face of the car, the front end, the mouth and how the key elements wrap around the headlights and creates a brow over the lamp. And we do the same around the rear with the taillights. Lastly the interior of the car features a driver-oriented cockpit and that means all the interior controls and volumes are focused directly at the driver, so you really feel like you are in a cockpit.”

The Mazda3 has been around for ten years and the third-generation 2014 Mazda3 kicked off its global birthday party with a huge splash around the globe. Mazda hopes it will propel the new model to global success as it attempts to be the leader in its segment. Look for the all-new 2014 Mazda3 to be in U.S. showrooms this fall. Pricing will be announced closer to its North American launch.

Watch The global reveal of the all-new Mazda3 and first ad videos.