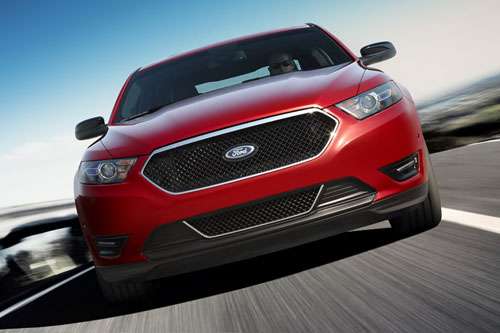 The 2013 Ford Taurus SHO is the sportiest and fastest Taurus ever to wear the acclaimed Super High Output badge with 365 hp and a true performance package.
Advertisement

When you think of true performance sport sedans, the German brands like BMW, Audi and Mercedes, that boast all-wheel drive capability with sports-car performance and luxury trappings come to mind. If you want a domestic alternative, Ford is offering a true performance sedan in the 2013 Ford Taurus SHO.

And it looks like Ford is succeeding in convincing buyers that the 2013 Taurus SHO is worth a look. Sales show that about 10 percent of all Taurus buyers leave the showroom with a SHO badge, and half of the performance sedan's sales have been buyers looking at brands like Audi and BMW. And those buyers have good reason to make a switch to the 2013 Ford Taurus SHO.

The SHO package is definitely not just a badge on the fender, but it’s a true high-performance package designed for the track experience. It starts with the 3.5-liter turbocharged V-6 that pumps out 365 horsepower and 350 lb.ft. of torque. It's mated to a six-speed SelectShift automatic with paddle shifters for quick shifts. Underneath, the 2013 Taurus SHo gets a sport-tuned suspension that engineers say is not too overly aggressive for daily use, but is sporty enough for track use.

Ford says this is a car that the family can use as a grocery hauler during the week, and can be taken to the track on the weekend. The 2013 Ford Taurus with the SHO Performance Package is a stealthy car that will fool those who are not familiar with the car. The 2013 Taurus SHO also comes with all-wheel-drive that allows the car to pull with all four wheels out of a corner right on line.

The AdvanceTrac ESC (electronic stability control) is fitted with a true off mode with the SHO Performance Package, so the driver can push the car without unwanted stability control intervention allowing for extreme spirited driving. But Ford says the biggest improvement over the 2012 model is the brakes which were the biggest complaint that they heard from SHO buyers.

The 2012 Taurus SHO brake issue has been addressed

The new 13.8-inch front rotors and 13.5-inch rear discs are eight-percent larger in the front and five-percent in the rear to help the system dissipate heat more effectively and resist fade under heavy abuse. It doesn’t matter how fast a perfromance car will go if can’t stop quickly as well.

The new Performance Package for the SHO also includes hardware like springs and dampers with specific tuning rates, a recalibrated power steering system, a higher capacity cooling system and 20-inch wheels wrapped in high-performance summer tires. Ford says that the 2013 Ford Taurus SHO is a car that is ready to make regular trips to the track.

Watch the special video below on the sleeper 2013 Ford Taurus SHO in action at Grattan Raceway in Belding, Mich., and hear what engineers have to say about this fast and fun family Taurus sedan.