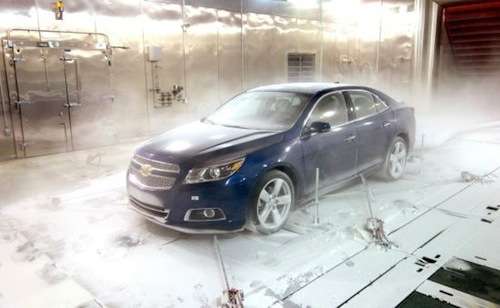 The 2013 Chevrolet Malibu Turbo will be sold in more than 100 countries and has gone through some extreme testing to be prepared for its global launch this month.
Advertisement

The all-new 2013 Chevrolet Malibu Turbo is ready to handle its new mission to be a global car. It is arriving this month and has gone through some of the most severe testings to get it ready for extreme temperatures around the globe. The new Malibu mid-size sedan is getting an all-new 2.0-liter turbocharged engine that will infuse the car with a new global spirit and Chevrolet wants the car to be ready to handle this new challenge. Engineers got the new Malibu Turbo ready by putting it through some extreme tests.

The testing has taken place in the General Motors Climatic Wind Tunnel located in Warren, Mich. where the new Malibu Turbo has endured everything from sub-zero conditions to temperatures of up to 140 degrees. The new mid-size Turbo sedan will need to be able to handle a wide range of real-world conditions. The new 2013 Malibu Turbo will be sold in more than 100 countries around the globe and the Climatic Wind Tunnel simulated those conditions the new car from Chevrolet will likely see.

Many automakers take their cars to remote locations to test their vehicles, but Chevrolet built the new test facility to help save both time and money. Ben Cruz, GM engineering group manager for thermal testing at the Climatic Wind Tunnel said, “Tunnel testing also minimizes the safety risks and traffic interactions associated with testing on public roads, and because the conditions are repeatable, we’re not limited by the whims of Mother Nature.”

The state-of-the-art facility, allows engineers to be able to test the Malibu Turbo’s cooling system, cabin climate control systems and see how the new 2.0-liter turbocharged engine performs under every condition possible. The systems were subjected to “the harshest weather conditions found from Death Valley, Calif., and Denali, Alaska.”

The new Malibu turbo should be ready for its global debut and buyers around the world will be drawn to the mid-size sedans capable powertrain. The 2.0-liter turbo engine produces 259-horsepower and 260 lb.-ft. of torque. The sporty sedan will sprint from 0-60 mph in 6.3 seconds and achieve a top speed of 155 mph. The Malibu turbo has an EPA-estimated fuel economy of 21 city and 30 mpg highway. Global buyers will also get a new car that features a four-wheel-independent suspension system, hydraulic ride bushings, and a premium electric steering gear.

Chevrolet notes that the Malibu topped the midsize sedan category in a recent third-party quality study, due in part to development work done at this facility. The all-new 2013 Chevrolet Malibu Turbo has gone through the severe climatic torture testing and with its “global pedigree and European tuning”, the new sporty mid-size sedan is ready to make its global launch this month. The new Malibu is now prepared for everything from “unimproved roads in developing countries to the Autobahns and mountain switchbacks of Europe.”