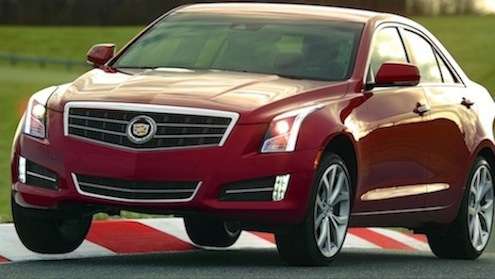 2013 Cadillac ATS attempts to compete with the finest sports sedans

The 2013 Cadillac ATS will compete in the highly competitive compact luxury segment with its all-new performance sedan.
Advertisement

The 2013 Cadillac ATS is one of the most anticipated and hyped vehicles to come out of GM’s luxury division in quite some time. Cadillac has announced that the new luxury sedan will sprint from 0-60 in just 5.4 seconds when equipped with the 3.6-liter V-6. Cadillac had made it clear that the all-new performance ATS will compete head-to-head with some of the most respected compact luxury performance sedans in the world like the BMW 3-Series, Mercedes-Benz C-Class and Audi A4. And you have to give Cadillac credit for attempting such a large task.

We reported here in May, that Cadillac reports their all-new compact luxury sport sedan is the lightest vehicle in the U.S. segment, and will be able to go up against the best competition. The ATS with the 2.5-liter engine and six-speed automatic weighs in at 3,315 pounds. But just being light doesn’t always translate to the best performance. There are many other factors that need to go into a true performance sedan.

How does the 2013 Cadillac ATS stack up against the competition?

When you look at the base model ATS, it doesn’t stack up very well against models from Mercedes and Audi. The base ATS comes standard with a four-cylinder with 202 horsepower. According to Motor Authority, this base model will sprint from 0-60 in 7.5 seconds which is slower than both the Mercedes C250 Luxury and the Audi A4 Premium. Both competitors post higher horsepower ratings than the base ATS. But because the base ATS is lighter, it gets better fuel-economy.

But performance enthusiasts will be able to get another engine choice in the ATS with a 2.0-liter Turbo Performance ATS, which comes with a 272-horsepower turbocharged direct-injected four-cylinder with an available six speed manual transmission. With this engine, the ATS gets a little quicker with a 0-60 time of 5.7 seconds, which is 0.2 seconds quicker than a BMW 3281 2.0L Turbo.

But those buyers who are looking for even more performance will have the top engine option for the ATS. Cadillac is counting on their top engine range 3.6-liter V-6 with 321 horsepower to be able to run with the big dogs. Cadillac says the new rear-wheel-drive ATS with this engine will go from 0-60 in 5.4 seconds and is among the fastest in its segment. That’s the same sprint time put up by the BMW 335i, which comes with a 300-horsepower turbocharged in-line six engine.

The Cadillac ATS delivers slightly better fuel economy numbers with the base engine and comparable fuel-efficiency with the more powerful engine options compared with the competition. But the one category where the new Cadillac ATS beats the competition soundly is price. The base 2.5-liter ATS will start at just $33,990, and the top 3.6-liter with all-wheel drive will have a sticker price below $56,000.

Time will tell if the all-new 2013 Cadillac ATS compact luxury performance sedan will be able to compete with the German leaders, but from the looks of what Cadillac has done, they are off to very good start.