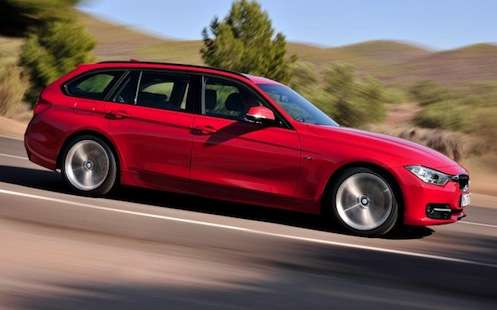 BMW has announced exciting powertrain details on the 2013 3-Series Sports Wagon that will make its U.S. launch early next year.
Advertisement

We reported here two months ago that the new sporty wagon would be making its way to U.S. shores next year. Today, BMW has released powertrain details on the new 2013 3-Series Sports Wagon. The new BMW 3 Series Sports Wagon will officially launch in Europe later this year and is set to arrive in U.S. showrooms in the Spring of 2013. The 3-Series sports wagon has been highly anticipated and the new turbocharged four-cylinder engine should get enthusiasts excited.

The four-cylinder twin-turbo engine will come mated to an eight-speed automatic transmission that comes on the recently introduced 328i sedan. The new four-cylinder engine will offer more power and be more fuel-efficient than the previous generation. The upgrade in power is mainly due to the use of twin-scroll turbo technology, which combines direct injection with variable camshaft and valve timing. Most carmakers are turning to the new technology to get more power from a smaller displacement engine.

The new 2.0-liter four-cylinder will produce 240 horsepower and 255 lb. ft. of torque to motivate the sports wagon. BMW says the 3-Series wagon will go from 0-62 mph in just 6.0 seconds with a gentleman’s agreement electronically governed top speed of 155 in Sport Line trim. It’s a shame we don’t have the autobahn here in the U.S. to be able to drive this new sport wagon legally at speeds it was designed to run at.

The new engine is lighter because of the use of an aluminum crankcase and more compact than a six-cylinder engine of equivalent power. Turbo lag should be non-existent do to the twin-scroll turbocharger. Back pressure is reduced to a minimum and the driver will experience instant throttle response. Direct injection on the 2.0-liter powerplant maximizes fuel-efficiency by injecting fuel very close to the spark plug and also increases injection pressure and higher compression. The result is increased performance and fuel-efficiency. BMW reports that the new 2013 325i using the same engine records average fuel consumption of only 6.8 litres per 100 kilometres (41.5 mpg), allowing it to better the economy of the outgoing BMW 325i Touring by 10 percent.

An eight-speed automatic transmission will be mated to the 2.0-liter twin-turbo engine and will be available with optional paddle shifters for more spirited driving. The new state-of-the-art gearbox offers additional ratios not currently offered by any competitors in the premium compact sports wagon segment.

A sports version of the new 8-speed transmission is available as an option for cars equipped with the Sport Line and M Sport package. A rocker switch on the center console, enables drivers to choose between ECO PRO, COMFORT, SPORT and SPORT+ modes. Each mode activates different settings for the relevant powertrain and suspension components for maximum performance.

Buyers can chose between four different trim levels depending on how much performance they want from this sporty grocery hauler. Sport Line, Luxury Line, Modern Line and M Sport package.

The all-new 2013 BMW 3-Series Sports Wagon brings the versatility of a wagon with the driving dynamics of a true sport sedan. Driving enthusiasts can have a practical wagon for the family during the week, and a performance car for fun on the weekends. Look for the 3-Series Sports wagon to arrive in U.S. showrooms in spring 2013. Pricing details and features will be announced closer to the sale date.