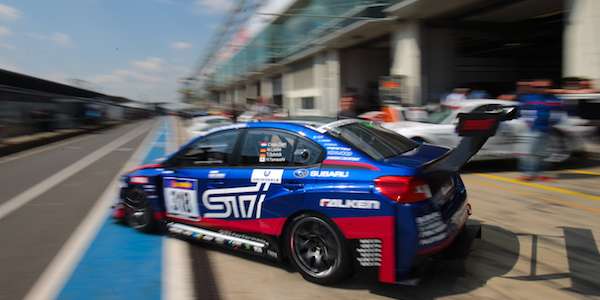 The 2016 Subaru WRX STI NBR wins its class again at Nurburgring 24-hour. How hard is it to win?
Advertisement

Subaru Tecnica International (STI), the performance arm of Subaru, took the SP3T class win in the 2016 Nurburgring 24-Hour Race, held in Germany last weekend. STI races the Subaru WRX STI NBR car which is based on the all-wheel-drive production 2016 WRX STI. How hard is it to win?

The team started second on the grid, following qualifying. But the biggest challenge came from the weather. STI has competed in the grueling 24-Hour race for nine consecutive years. This marks the fourth win in the SP3T class for STI, following its victory last year. This win proved more than ever how well the WRX STIs all-wheel-drive system works.

The WRX STI responds when other cars fail

The WRX STI completed 121 laps (approximately 3070 kilometers) in 24 hours, to claim the class win. The STI was driven by Carlo van Dam (Netherlands), Marcel Lasee (Germany), Tim Schrick (Germany) and Hideki Yamauchi (Japan). Starting in second position, the team overcame the number one car quickly and lead for almost the entire 24 hours of the race. When the severe weather hit, the WRX STI responded when other cars failed.

Almost from the very beginning of the race (the fourth lap for Subaru) the weather deteriorated quickly. There was a heavy rain, and in some parts of the track, hail. The sudden change in weather conditions caused a large number of accidents. The drivers lost control as their cars became totally unmanageable in the slick conditions. But not the WRX STI with Symmetrical AWD.

STI attributes two factors to the WRX STI’s successfully getting through the severe conditions on the track. It’s proven all-wheel-drive system and the boxer engine that lowers the center of gravity improving its driving dynamics.

When the weather hit, Carlo van Dam, and the WRX STI’s superior dynamics helped keep the vehicle under control. Due to the large number of accidents, race officials brought out the red flag and suspended the race for approximately 3 hours. When the race resumed on a wet track, the Subaru WRX STI held first place in the class throughout the remainder of the race. In the overall classification, STI took 20th place, showing even better results than more powerful cars. There were 158 teams who started the race, but about 40 of them weren't able to finish because of various problems with their cars.

Why is the Nurburgring 24-hour the hardest race on the planet?

The Nordschleife is considered one of the toughest race tracks in the world. It’s a narrow serpentine with a hard coating, closed corners and sharp elevation changes, without lighting and with minimal security measures. In many places, cars literally come off the ground. There’s more than 170 turns of varying difficulty and a huge number of blind ridges and narrow corridors, protected only by fencing. There’s very little room for error.

Subaru and STI have used the Nordschleife as a test track since 1992. It’s how they ensure their production models conform to Subaru’s brand standards in endurance, speed, and giving consumers confidence behind the wheel. Subaru WRX STI enthusiasts have known about the performance model’s superior driving dynamics for decades. It’s difficult to win the Nurburgring 24-hour race and Subaru has done it with back-to-back wins. The 2016 Subaru WRX STI NBR proves again why the production model is the best performance value on the market.

For Some Former Daimler Managers Daimler Is Authority, While Tesla Is Like a Startup
How Daimler Unintentionally Subsidizes Tesla Giga Berlin
END_OF_DOCUMENT_TOKEN_TO_BE_REPLACED