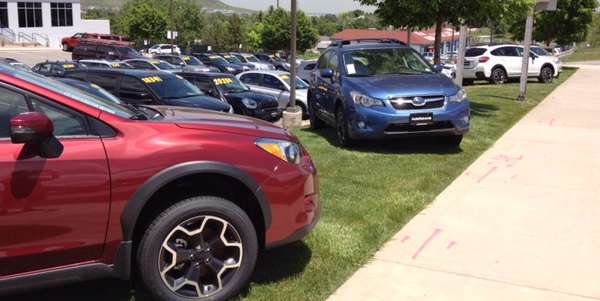 2 Reasons Why Subaru Is One Car Shy of a Load

Subaru has a problem. Dealers can’t get enough Forester and Outback models and customers are waiting. How long is the wait?
Advertisement

There’s good news and bad news for Subaru. Subaru of America reported another record sales month for May. That’s the 54th straight month of increasing sales for the automaker. The bad news? Customers have to wait to get that new 2017 Forester SUV or 2017 Outback wagon. How long is the wait?

Subaru dealers are telling customers they have to wait 4-6 weeks to get their new all-wheel-drive vehicle. Dealers are selling too many cars and Subaru can’t keep up with demand. Demand for the all-wheel-drive 2017 Forester and 2017 Outback is outstripping the supply of cars they get from Subaru. Are customers waiting?

According to an interview with The Wall Street Journal, Tom Doll, Subaru of America COO, he acknowledges the lack of vehicles risks alienating buyers. “They’re not going to wait 10 weeks,” said Doll. But he says: “They will wait four to six weeks because our customers like us and have a little more patience.” Why can’t Subaru just produce more automobiles?

2 Reasons why Subaru is one car shy of a load

The second reason is because of production constraints. Subaru only has two factories, one in Gunma Japan, and the other in Lafayette, Indiana. Subaru isn’t big enough like Japanese giants Toyota and Nissan to build another factory here in the US. So they have to retool the factory they have and increase capacity.

Help is on the way

Subaru is increasing capacity at their Indiana plant first by dropping Toyota Camry production which they’ve been building alongside the Outback and Legacy models. That agreement with Toyota ends later this year. Fuji Heavy Industries, parent company of Subaru is spending $140 million and expanding the U.S. plant. Production capacity will increase the factory’s output by 50 percent to nearly 400,000 units beginning later this year. This will help.

Subaru is ramping up now and is hiring 1200 new employees for the Indiana plant. Subaru of Indiana Automotive (SIA) will then begin producing the new 2017 Impreza compact later this year. Subaru will also manufacture a new 3-Row crossover at the revamped plant in 2018.

Dealers have had to live with the shortage of Subaru Foresters and Outbacks for some time now. Consumers, like the vehicles so well, they have been willing to wait. The problem should go away with increased production in the US. Subaru says they have a goal of selling 600,000+ vehicles in 2016. If they do, the tiny automaker could outsell every American brand except for Jeep, Ford and Chevrolet.

Mark wrote on June 5, 2016 - 1:57pm Permalink
"One shy of a load"? What the hell does that mean? If you're going to write for an American audience, you need to use common American language and phrases.
Subaguru wrote on June 6, 2016 - 2:12pm Permalink
I'm going to pre-order my 2017 Forester XT here soon.
Paul Johnson wrote on January 5, 2017 - 8:04pm Permalink
How will increasing capacity at the Lafayette IN plant help the Forester and Outback shortages when the increased capacity is used to build Imprezas?
nancy stedman wrote on February 18, 2019 - 8:11am Permalink
I recently ordered a Crosstrek with a manual transmission and am told it will take 2 - 4.5 months to get.