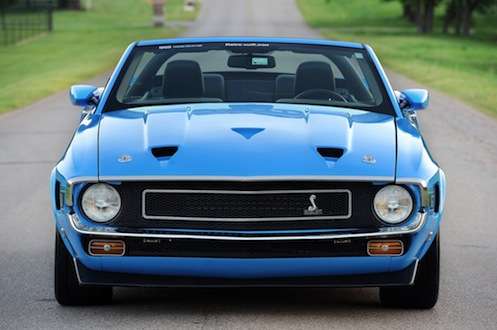 Retrobuilt brings the past into the future with an officially licensed 1969 Shelby GT500 Convertible replica.
Advertisement

For any auto enthusiast who wants the classic look of a 1969 Ford Shelby GT500 but doesn’t have the bank account to afford an expensive authentic restored original, Retrobuilt has the answer. The Missouri-based company will create a car with the styling of the classic muscle car of the past, and infuse it with the latest performance and technology offered today. What the buyer ends up with is a retro concept with the drivability and reliability of a modern day car.

In fact, Retrobuilt has even scored a licensing deal with Shelby so that they can use the name, and the car will come with officially-licensed Shelby logos and badges. The 1969 Shelby GT500CS even comes with authentic metal bumpers, door handles, rear window louvers, and original type mirrors and side marker lights. The company also handcrafts the stainless steel trim on the front end of every custom muscle car. And if you want a fastback, Retrobuilt also offers a 1969 Mustang Fastback conversion that takes the drivetrain of the current S197 Mustang with the styling of the legendary Boss 302.

Mustangs Daily says, all the company needs to get started on the 1969 Shelby GT500CS Convertible, is a 2005 or later Mustang convertible. They can use any current engine and drivetrain configuration to build the new muscle car replica. They can take a V-6 or even use the current 5.0-liter Mustang GT engine. If someone wanted the retro look with the current Shelby horsepower, they could even use a Shelby GT500.

Retrobuilt then replaces all the exterior bodywork on the car except the doors with new fiberglass body panels. The car looks authentic with details like retro chrome trim, door handles and taillight covers. The 1969 Shelby GT500CS Convertible is then fitted with custom HID headlights, vinyl striping and a Shelby wheel and tire package.

For those who want maximum performance, Retrobuilt will install a supercharger kit, lower the suspension for optimal track performance and upgrade the brakes to a Baer braking system. Retrobuilt literally spends hundreds of hours designing, developing and building the finished product for their customers. Every car comes with its own Retrobuilt serial number, dash plaque and certificate of authenticity. Retrobuilt doesn’t say exactly what a custom Retrobiult 1969 Shelby GT500CS Convertible will cost because each car is custom designed for each customer. We do know it is considerably less than buying an authentic restored original.

The custom car company is officially licensed by Shelby and endorsed by Carroll Shelby himself. Shelby said, “I know what it takes to build a car and Retrobuilt has built a car. They have paid me the most flattering honor by recreating some of my favorite cars.”

Check out the Retrobuilt 1969 Shelby GT500CS Convertible at their website.