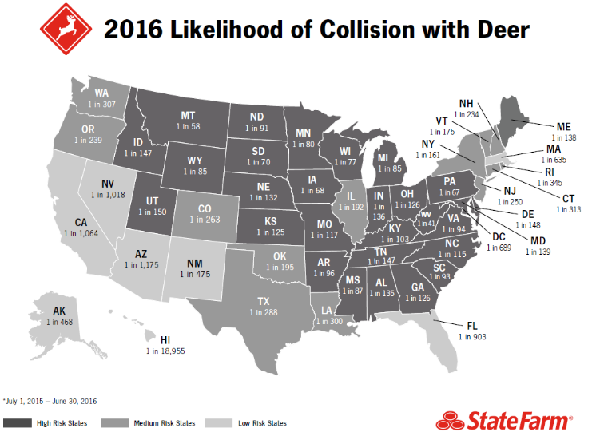 Is Your State High on the Deer Impact List?

State Farm lays out the facts on deer strike frequency, and it isn’t pretty.
Advertisement

Drivers in the states with the highest frequency of deer strikes have more than a one in 50 chance of being involved with an animal strike this year. That according to State Farm Insurance who analyzed their claims data to provide the map above that shows which states have the highest likelihood of a vehicle-deer strike.

State Farm says that “…one of every 41 West Virginia drivers will have an insurance claim for damage caused by a collision with a deer in 2016.” That is an amazingly high number. The company throws in elk and moose as well. Why not?

According to State Farm, the most likely months in which to hit a large animal like a deer are November, October, and December, which coincide with the mating season. Interestingly, the chances of striking a deer are rising considerably year over year. In Montana, where the chances are one in 58, the chances have increased about nine percent this year alone according to the company.

So what can you do to avoid striking a deer? Drive as fast as possible. That way your trip is shorter and thus, there is less time for an accident to occur. That’s out advice anyway. State Farm has other ideas, like:
- Slow down, particularly at dusk and dawn
- If you see one deer, be prepared for more deer to cross the road
- Pay attention to deer crossing signs
- Always buckle up, every trip, every time
- Use your high beams to see farther, except when there is oncoming traffic
- Brake if you can, but avoid swerving, which could result in a more severe crash
- Remain focused on the road, scanning for hazards, including animals
- Avoid distractions, like devices or eating, which might cause you to miss seeing an animal
- Do not rely on products such as deer whistles, which are not proven effective
- If riding a motorcycle, always wear protective gear and keep focus on the road ahead
Hitting a deer isn’t cheap. State Farm says that the average claim runs about $ 4,000.

Mark Day wrote on September 20, 2016 - 7:16pm Permalink
In Ohio, deer are a "protected species" - which means the state has found another way to make money - deer hunting licences. Meanwhile, the excessive deer are literally killing motorists. Excessive deer are also an expensive nuisance for farmers and home gardeners - they'll even eat spruce tree foliage if not much else is available.

Toyota's First EV Will Have a Name of BZ: Toyota BZ
First Videos From Inside The Boring Company's Las Vegas Loop
END_OF_DOCUMENT_TOKEN_TO_BE_REPLACED