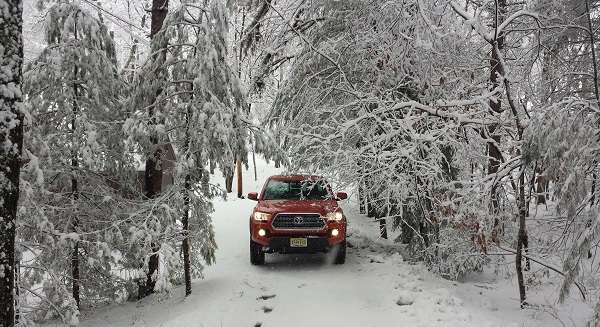 As part of our comprehensive Tacoma testing, we drive the TRD Off-Road in winter snowstorm conditions.
Advertisement

Torque News in the midst of a comprehensive 2016 Toyota Tacoma TRD Off-Road test this month and a pair of strong winter storms hit our New England test area. This provided us with a perfect opportunity to test the Tacoma’s four-wheel drive system and its Goodyear Wrangler All-Terrain Adventure with Kevlar tires. Our tester for this segment was the V6 automatic drivetrain.

We first tried the Tacoma at slow speed in about four inches of snow in 2H mode (two-wheel drive). Even moving slowly the truck was slipping and starting to dig in so we switched to 4H (four-wheel drive high). Once 4x4 was engaged the truck moved around in moderate snow with ease. On the road, the tires were great in starting and in straight line driving with small wheel adjustments. Over time the snow mounted to about nine inches, plowed in some areas to varying degrees. The Tacoma was perfectly happy in all on-road snow conditions.

Stopping is the real test of a tire in snow, and the Goodyear Wranglers did not inspire the confidence a narrow snow tire would. Lacking the tools to do instrumentation testing, we can only report our driving experience. Part of the problem is that the tires on this TRD Off-Road Tacoma are relatively wide and have a relatively flat contact patch. By that, we mean the tire’s architecture puts most of the tread face to the ground as opposed to being more narrow and leaving some tread off the ground, which would be better in snow. Stopping was predictable, though, and given this tire’s excellent ride on dry pavement and its strong abilities on mud and sand, it is hard to imagine a better all-around 4-season tire choice.

After some familiarization, we used 2H almost all the time and reserved the 4H setting for hills and for starting off in deep snow. One part of snow storm driving is getting into and out of driveways that are plowed in by town plows. The high, compacted snow at the entrance and exit of a driveway is too much for crossovers like a Subaru Outback, or even one like a Toyota Highlander if the height is above the lower valance and fog-lights. In the Tacoma TRD Off-Road, this was never an issue. We were able to simply drive through or over even a high snow bank at the end of driveways with no fuss and no damage (I once stuffed the fog lights of an Outback into the engine bay, and that gets pricey).

We never needed 4L or crawl control in our on-road snow storm testing of the Tacoma, but it was nice to know that if the conditions got extreme we would still have one more level of capability to call upon. Overall, the 2016 Toyota Tacoma TRD Off-Road gets two thumbs up in winter weather.

Bo wrote on February 12, 2016 - 9:46am Permalink
This is one dumb article. QUESTION: Why doesn't Toyota put tank treads on the Tacoma? ANSWER: Because 99.999% of the time it rides on roadways.
John Goreham wrote on February 12, 2016 - 4:22pm Permalink
Maybe the image threw you, or maybe it was the title, but this winter snow report was conducted 100% ON-road. You can see a telephone pole in the image behind the truck on the passenger side. The only part not done on-road was in my driveway. The name of the truck trim is "Tacoma TRD Off-Road." Just Like Chevy and other brands also have trucks with "Off Road" in their names. Here where I test cars, we had four feet of snow in ten days last winter. People take snow driving (on-road) seriously.
mykaelp wrote on February 13, 2016 - 1:09am Permalink
That's one dumb comment.
Bill mee wrote on December 11, 2016 - 1:15am Permalink
Yeah... Like i have four tires on my truck too. Everytime i test them in the snow when compared to like... my truck, they always perform awesomely. So based on the results Like... this is why my truck manufacturer uses this tire. Duh what size tire were they? Like some oem tires are not same as same size tire same model and manufacturer as the oem tire is usually lighter to get better fuel economy. My wifes 2012 lx crv oem tire is a special code which is 7lbs lighter than same size and model tire in non-oem code. The only information in this article is someone drove a tacoma in snow and liked it. Same person thought best way through a snow drift in a subaru is to hit her hard and punch through
John Goreham wrote on December 12, 2016 - 2:00pm Permalink
The link in the story brings you to the size and goes deeper on the topic of Tacoma tires if interested.