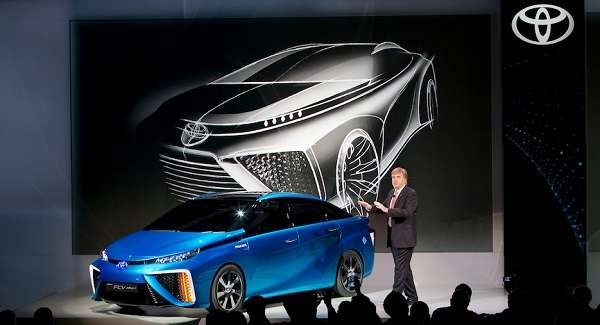 The Toyota Fuel Cell Vehicle has arrived. Should it be its own line or should Toyota leverage its most powerful name to make it work?
Advertisement

Tomorrow Toyota will show the production version of its fuel cell vehicle, which it creatively calls the FCV. The vehicle will make its first production version appearance in Aspen at the Ideas Conference. Just yesterday the company revealed the car in the Japanese market. This mid-size sedan has the approximate dimensions and basic mission of the current Camry. It also has about the same range as a Camry on a tank of “fuel.” Will Toyota eventually market this vehicle as a Camry? There are good reasons why, and why not to do it. Let’s weigh the two options.

Toyota Should Market the FCV as a Camry Fuel Cell Car
If Toyota is serious about not going forward with battery electric vehicles, then making a Camry FC (as in Fuel Cell) would do wonders for the idea of moving fuel cell vehicles forward. Camry is the number one car model in the US, and has always been near first for decades. By adding a Camry FC to the model line (alongside the Camry hybrid and other Camry cars) Toyota would signal that the debate is over and fuel cell cars are now here.

This would require that Camry be modified to accept the fuel cell, or more reasonably, the FCV would be re-skinned to look more like a Camry. The fuel cell and the other drive components would make it hard to simply drop the fuel cell drivetrain into the current Camry. It is absolutely doable for Toyota, they would just have to decide to make it happen.

The main benefit here is that Camry carries a lot of weight in the consumer consciousness. Camry is overwhelmingly a positive word in the car world. If Toyota labeled its Camry an FC it could help the fuel cell cause.

Keep the Toyota Fuel Cell Car Separate Like the Prius Line
The other side of the coin is the idea that keeping the FCV separate might also have some benefit to both Toyota and to the fuel cell vehicle becoming a viable new option. The Prius model worked. It worked for many good reasons, but one reason was Toyota build a “brand” around the Prius. It is a no-holds-barred fuel miser and a hybrid. The Prius line sells extremely well and everyone that says the word imagines one in their mind and they know what it is and what it does. And what it does not do.
By keeping the FVC separate, Toyota could, over time, develop the FCV into a family of cars like the Prius line has successfully become. Mixing in the Camry name might just confuse people and make it seem like the Camry has been modified to run on hydrogen.

The Toyota FCV is going on sale in Japan in less than a year and will be sold in the US soon after. Toyota is the number one automaker on Earth in terms of both sales volume and profit. Especially profit. Toyota’s Bob Carter said this week that “The success of fuel cell technology will depend less on the genius of the car, than on the ownership experience. Stay tuned, because this infrastructure thing is going to happen.” We have no doubt it will. However we do wonder whether it will be a Camry using that infrastructure or not.

DaveG wrote on June 27, 2014 - 4:35pm Permalink
Fuel Cells are DOA. The touted range of Hydrogen is ~420 miles, meaning most fill up bi weekly for 12K miles/year. Very cool, Right? The problem is, one virtually never needs an external charging station with a PEV. Exit car, close door, plug-in. So the range of a PEV is infinite 99% of the time. Of course on long trips, the 420 mile range is important, right? No. On a 12 hour trip people stop 2 to 3 times anyway for breakfast, lunch, coffee, bathroom, etc, so anything past say 5 hours (300 miles) is simply superfluous, so the 420 buys Toyota nothing really. What is significant however is cost. Hydrogen unfortunately costs as much as gas, while home electricity is 25% of that, and free if you use Tesla's super charging stations. You can travel across the US at no cost. Of course if you really require a speed refill, Tesla thinks it can get fast charging down to 5 minutes, or maybe the battery swap model might work. However, the biggest obstacle to hydrogen is the exorbitant cost of infrastructure. The cost to convert a single gas station to hydrogen costs millions. With PEV's, the infrastructure is already in place, all the way to your home. Since everyone fuels their PEV at home, the number of external electrical charging stations needed is a small fraction of present gas stations we have now(~121,000). To convert the gas station infrastructure to hydrogen for all 121,000 filling stations now present will be a quarter to a half a trillion dollars. Those costs come from somewhere. Of course, California is the first state to try to adopt fuel cell technology, and they are going to have a whopping 100 hydrogen fuel stations around LA. People better know where these stations are, and expect to drive 10-20 miles just to fill up each time. You are also back to range issues. You can't go across country in a hydrogen car until infrastructure is in place. The Tesla infrastructure now spans the US, and is growing very rapidly (and only costs 300K to build). Think about it? Who is going to buy a hydrogen car? Price of fuel, 400% more expensive than PEV. Ability to find fuel, difficult to impossible depending where you go. Maintenance of Fuel Cells, more costly than PEVs. Performance, 135hp compared to 0 to 60 faster than a Porch. This is a VHS vs BetaMax style competition, except it is Ironman vs Scooby-doo.
John Goreham wrote on June 27, 2014 - 5:39pm Permalink
You have me convinced. No argument here. I've never understood where we are going to get the hydrogen without creating CO2. Not creating CO2 is the whole point of this. Sure, we can steal a little from various sources, but if we are going to fuel a nation with H somebody has to show me how we get the H better than say, just converting to Nat Gas trucks (first) and cars. Seems a little short-sighted.