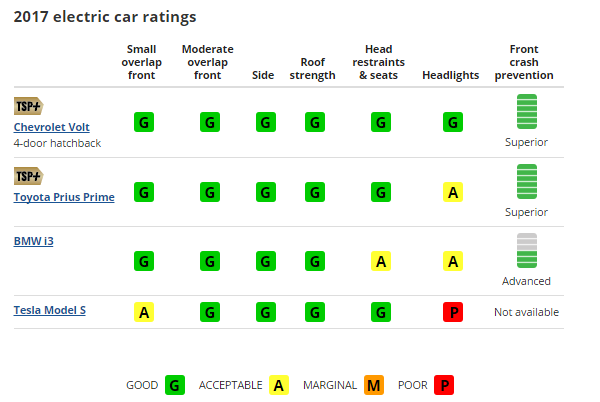 In IIHS Testing, the Tesla Model S misses earning top scores in not one, but three important ways.
Advertisement

The Insurance Insititute for Highway Safety conducts the most rigorous and respected crash testing in the United States. In addition to performing tests at higher speeds than the government-mandated tests, IIHS adds elements and crash tests to its ratings that no other group in the U.S. does in order to separate the wheat from the chaff in any given vehicle category. After a full round of testing, it is obvious that Tesla's long history of running behind the industry regarding safety is still ongoing.

Tesla failed to meet the industry benchmark for crash safety by falling short on the difficult small frontal overlap test. This test simulates the deadly telephone pole or tree impact crash that claims so many lives. In the test, only a portion of the front crash structure of the car is involved and the angle of the car makes it challenging for automakers to design proper seatbelt and airbag systems to protect the driver. In the Tesla crash evaluation, the driver (dummy) slipped out of the belt and the dummy's head impacted the steering wheel hard. This is a crash test that more experienced designers and automakers have now mastered, but Tesla has yet to. The company plans a redesign to come up to par.

That was not the only critical area that the Model S failed to earn the required score for a top rating. Tesla does not install forward collision prevention on its Model S standard, like Lexus does on the ES 350 for example. Forward Collision Prevention is key to the active safety systems that prevent accidents. IIHS says that Tesla could provide this technology to all customers, but that is not activated on all of the Model S cars being sold. (More on page 2)
- Read Our 2014 Story: Why you should only buy cars with a forward crash prevention system

Forward Collision Prevention is a system that may have prevented the death of two children caused by a Tesla Model S driver who rear-ended a vehicle on the highway, killing the buckled-in children. This is a real-life safety system that almost every automaker has as standard equipment on cars in the Model S price range. Tesla opts not make it standard for unknown reasons. Tesla was also one of the last automakers to begin using the technology, and many of the early Model S cars have no hardware that can be upgraded to actuate any Forward Crash Prevention system. (More on page 2)

One more reason that the Tesla Model S could not have earned top safety scores is that its headlights score Poor in IIHS testing. Much more affordable cars like the Toyota Prius earn a rating of good, but the pricey Model S, Tesla opts to install headlights that do not measure up.

Incredibly, there is actually one more reason that some Model S cars don't meet the required scores for a top safety score. In its longest-range model, the P100D does not have the required roof strength to meet the requirements of the IIHS test. Other, lighter models can. The roof crush test is a ratio of vehicle weight to crush force, and that tripped up the heavy P100D.

For many years Tesla boasted that its Model S was the safest vehicle on the road. When new, the Model S went for a period without any driver or occupant deaths in Tesla crashes. We all know that time has come and gone and that drivers have been killed in Tesla crashes. Over time, as more Model S cars are sold, we will have a real-world gauge of how well the Model S does in that regard. For now, the gold standard remains another green car, the Toyota Highlander Hybrid, which in real world crashes earned a zero driver death rating.

Alexis2114 wrote on February 1, 2017 - 9:33am Permalink
In one group a guy named Robert left a very interesting comment on the subject, which I am pasting here. He wrote. "even the thumbnail sums up the problem, the headlights suck. I had one of the refreshed Model S as a service loaner recently and the new LED headlights seem worse than the original HID lights. I was able to change the ones out on my pre-refresh model with higher wattage Morimoto HID lights that made all the difference."