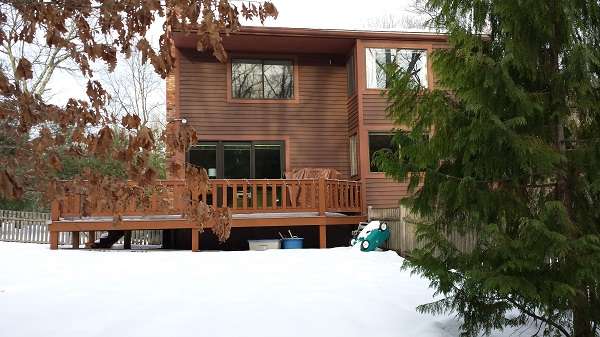 Forget the electric or hybrid car, make your house a hybrid if you really want to save gas and oil and help the environment.
Advertisement

The reality for many families in much of the United States north of the Mason Dixon line is that they burn a lot more oil to make hot water and heat than they burn gasoline in cars. For those of you who live where heating a house from September to April is not required – you’re the smart ones! This is a real story about how one person reduced the amount of home heating oil he used by making his house a hybrid.

A hybrid to our modern ears is a car that has both a gasoline engine and also an electric drive. There have been other uses of the term over the years. For example, submarines, buses, and trains also use the term with a similar meaning. The idea is to use dual forms of power in an intelligent way to save fuel. In that context, it occurred to me that some of the changes I have made to my house are directly related to this theme and the benefits achieved are some of the same goals a hybrid car owner, or electric vehicle owner is trying to achieve. Even better, I found that the cost in dollars and hassles to save the oil (gas, diesel whatever) can really favor the hybrid home concept versus a hybrid or electric car.

When I bought my 1979-built home it used a LOT of oil. About 900 gallons per year is the number I remember those first few winters about 20 years ago. Shortly after I moved in I changed most of the doors and windows to super-efficient Pella triple-pane units. They needed to change due to wear and tear anyway. It was not only an energy upgrade project. I also changed the hot water heating system which uses only oil to be dramatically more efficient. These changes reduced my oil usage to about 700 gallons per year. As part of each project, I received rebates from the state of Mass. via my electrical provider and also maxed out the federal tax rebate on home energy improvements. Following all of this work I had a home energy assessment by my local utility (NSTAR) and they could not find any more upgrades to do. That made me pretty proud.

I did the most important thing almost by accident. When I upgraded the house’s AC I spoke to my HVAC contractors, who were really good about giving me some great tips on insulation and other topics. They brought to my attention the value of a mini-split AC system that includes a heat pump function. A heat pump is basically AC in reverse. On my first floor, which is about 900 square feet, I only have one AC unit. The blower and controls are inside the house and are extremely compact and quiet. In terms of noise, it is dramatically better than the old in-wall AC we used to have. The compressor and its fan are outside the house and in my case almost invisible. The mini-split costs about $2500 installed and it cools and dehumidifies the whole first floor. It has a thermostat that also has a very smart timer. I can program it to come on, go off, that sort of thing like any smart thermostat.

The best thing about this unit is that it turns into a very efficient heater when the outside temperatures are between about 35 F and 60 F. According to my HVAC contractor, the heat pump function didn’t really cost me any extra compared to a mini-split that would have only worked as an AC unit. I think they said it was about $250 more. The upshot of this is that I can now heat my house in spring and fall, and also on mild winter afternoons with no oil at all, just electricity. I’m using it right now on December 20th. Since it is on the first floor the rising heat also helps reduce my need to heat the upstairs with oil.

To keep this story manageable I will tell you that my 2013 oil delivery tickets (I have them going back to when I bought the house about 20 years ago) say I used 580 gallons of oil over the past 12 months and about that same amount the years since I got the heat pump. I credit the heat pump with saving me about 150 gallons of oil per year, and about $450 in oil costs per year. I have expensive electricity in Mass. It is about $19 cents per kWh. Even so I only paid $90 total for electricity last month, which is typical for me. Using the heat pump adds about $.50 per day to the bill as far as I can estimate.

Electric vehicle owners stop using gasoline and switch to electricity and claim that is a good thing for the environment. I’m willing to accept that premise. However, there are a lot more ways to reduce the use of oil than just buying an electric or hybrid car. My cars “only” use about 60 gallons of gas per month. Using the electric heat pump I save 20% of that amount in heating oil per year.

Natural gas is great, and if I had it in my area I would do a cost/benefit analysis and consider switching. It is not an option for me and none of the houses I grew up in had it either. I could also consider removing my oil heat and adding all-electric baseboard heating. I own some property as part of a rental business that has only electric heat, but it was designed that way and is in a condo type building with shared walls in which the plumbing is kept away from the outside walls. My house was plumbed and designed differently and converting to all-electric might be a hazard. It would definitely cost many thousands of dollars. Concern about frozen plumbing pipes and the ability to heat a house during storms would prevent me from ever switching this house to just electric baseboard heating. I have a generator and I can heat and light my house indefinitely when the electricity is not working. This past winter we had six days with no power due to storms.

Just as an aside, my house also has “passive solar” as it is called. It is a contemporary and it has a lot of glass facing south. There are hardwood trees on that side that provide shade in the summer and drop their leaves to let light hit the glass in the winter. It is dramatically effective – when the winter sun is shining. I also have a wood-burning fireplace which I use, but it is mainly cosmetic and I am out of the house often, so a wood pellet heat or similar system is not a good solution for me.

Feel free to poke holes in the logic here. I’m willing to learn and even to admit I’m wrong. However, if you live where oil and gas are the heating fuels for homes, and you have not yet made your house a hybrid, switching to a hybrid or electric car is not the only way to save money on energy, or help the environment by reducing one’s oil usage and carbon footprint. It may not even be the best way.

Jason wrote on December 30, 2013 - 4:54pm Permalink
This is a very interesting story. I am glad that you are saving money and helping to contribute to a cleaner planet. Since you mention you are paying $.19 per kilowatt you might want to look into getting solar installed. You should be able to cut your electric bill almost in half with solar. Here in California solar can be installed for $.10 per kilowatt and you get to keep the 30% federal tax credit. I also recommend switching to LED lighting and checking out your appliances before switching to solar. It sounds like you are already well on your way to energy efficiency with passive solar. If you do install solar you might want to look into a Volt to get the most bang for your buck.
John Goreham wrote on January 2, 2014 - 4:47pm Permalink
Excellent idea and I mean that sincerely. My lights are all LED except a handful of special purpose ones. The guys who did the energy audit were surprised. I have become an aficionado of those little squigglers. Some hum. Some don't come on right away. Some are too sensitive to cold. Some are too big. There are multiple colors. - - I have heard of solar roofing shingles. If those become a viable product when I re-do the roof I would consider it. Retrofitting solar and putting holes in my current roof to save $45 per month is really an unattractive idea for me here in the snowbelt. 14 inches coming tonight. Thanks for commenting. We appreciate the dialogue very much.
Jason wrote on January 2, 2014 - 5:14pm Permalink
It's great to hear that you have made the switch to LED. That is probably the easiest and most cost effective way to save energy today. As far as putting holes in your roof any good solar contractor will reseal any punctures they make in the roof and guarantee there will be no leaks. If the solar company isn't willing to make that promise I would suggest finding a different contractor. Obviously your roof is important, especially where you live, so I completely understand your concern about the roof.