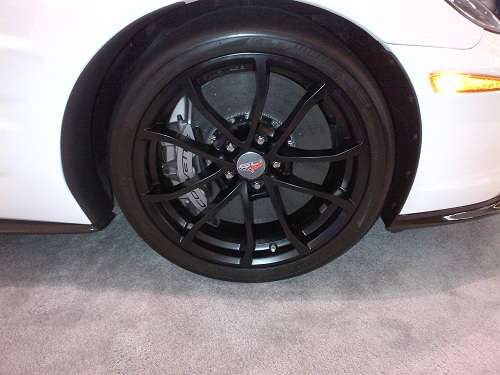 Why doesn't my car have direct injection and carbon ceramic brakes?

Not every feature that appears to be a benefit is. For many vehicle upgrades there is often a trade-off.
Advertisement

Automakers love to educate the public about the newest and best features that they have come up with. We always hear the benefits of these new features, but very rarely do we get to hear about the trade-offs that can come with these new trends or gadgets. Let’s take a look at some new innovations and see how the benefits stack up to the sacrifices.

Big Fancy Wheels
Wheels and tires are such a huge contributor to the way a car feels to the driver, and the way it performs, that a short article can never cover the subject completely. Let’s look at a couple wheel and tire trade-offs that many people are not aware of. We all know that wheels are getting bigger and bigger. This is mainly due to styling, not performance. Designers know that cars look good with big wheels and they thus design sedans and crossovers with massive wheel arches to be filled with oversized wheels. There was a time not long ago when a 14 inch diameter wheel was just fine for almost all vehicles. No more. Manufacturers like the look of larger wheels and have convinced the buying public bigger is better. 18 inch diameter rims are now quite common on passenger cars. However, the larger the diameter a wheel is the more resistant it is to starting to roll, or slowing down. This creates a flywheel effect that makes cars slower to accelerate and harder to stop. Bigger wheels and tires also add weight to a car in the worst possible way. Called “unsprung weight,” weight that is not being handled by the suspension makes everything else more difficult for chassis tuners resulting in more robust, and again heavier, suspension components. Thus larger wheels and tires are at odds with fuel efficiency, speed, and stopping distances.

Tied to the bigger is better wheel trend is low profile tires. That is the amount of sidewall a tire has. Sidewalls are getting thinner and thinner. This does sharpen handling, but it also makes bumps and potholes more jarring. Furthermore, without the flex a sidewall offers, damage is much more likely compared to a tire of the same brand, quality and technology. The worst problem related to these taller tires with tiny low profile sidewalls is the “Upgraded” wheel trend. Manufacturers often nail the compromise between handling and comfort on their entry level or mid-level trim offerings, but then will add much taller tires to the “XLE” or Special Edition trim level of a model. Often times it is not for the better, and a decent ride can be made worse by this fashion trend.

Low Rolling Resistance Tires
Tires can be made to optimize stopping and grip, and you would think they would be, but guess again. More and more, automakers are asking tire manufacturers to focus on fuel efficiency at the expense of handling and stopping distances. Some engineering decisions come with accidental benefits, say perhaps a tire with low roiling resistance is also a long-wearing tire. However, in this case low rolling resistance is at odds with grip. The reason that tire makers are upset is that once customers replace the tires that came with the car with some other brand’s tire and they realize what they have been missing, they blame the brand that came with their car for making the car handle and stop so poorly.

Engine Innovations Come With a Hidden Tradeoff
Lately engine manufacturers have discovered that direct fuel injection, which is simply spraying fuel into the combustion chamber directly, rather than into the incoming air headed to the chamber, improves their ability to manage the fuel and can save gas and boost power at the same time. It seems a win-win gain. However, by adding this component to the top of the cylinder head the valves are crowded. That means the valves must be smaller, shorter, or worst of all, fewer in number per cylinder. Thus, by adding direct injection manufacturers have had to spend an awful lot of money to redesign engines. When you notice a new vehicle with a strong engine without direct injection you can be sure that the reason isn’t that the Mfg. didn’t want to add it, or didn’t know how, but rather, they couldn’t redesign the whole top of the engine to accommodate it. Direct injection turns out to be noisy too. Some manufacturers have actually added noise cancellation systems to offset this. So by adding a fuel saving feature, automakers are now adding new, extra components just to make it tolerable.

On the topic of engines, the Chevrolet Corvette just entered its seventh generation and it still uses the “old” pushrod V8 design that it introduced back in the days of wooden ships and iron men. Why hasn’t Chevy seen the light and gone to overhead-cam engines like almost everyone else? For one reason, the Chevy engines are the most power-dense in their class, and always have been. Almost no manufacture can produce an engine stronger than the Chevy pushrod V8 with the same displacement. Almost. What none can do is make the engine smaller. The Chevy V8 design is smaller than the overhead cam engines that its competitors use and that means Chevy has a more compact front end, lighter engine in many cases, and can make the cars better because of it. Sometimes the new way is not the best way.

Front Wheel Drive vs the Rest
We all know that front wheel drive is the most efficient design for cars in terms of packaging, cost and fuel efficiency. However, front wheel drive comes at a huge cost in terms of handling. Because a front drive car has so much to squish into the front of the car, these cars often move the engine forward in relationship to the front “axle.” (By axle we mean the front wheel centers rather than a metal rod like used to be used to pair up wheels.) This weight over the front wheels forward of the center of the car causes the car to understeer. Understeer is not all bad. For most drivers (99% of us), given a choice between having the front end plow, or the rear end break loose, the choice is simple. At the limit a car for the general public is safer if it plows when the tires start to lose traction. However, when automakers standardized their top models on front wheel drive, they reduced the sporting nature of that car’s platform. Thus, it is very hard to make a car with a front drive design a premium car, or a sport sedan. Some automakers can pull it off. Acura does. Buick is trying hard. Audi almost does on some models, and other manufacturers have had some limited, individual success stories. Find two cars with the same price tag, one front drive and one rear drive, and take them out on a sporting ride and the rear drive car brings out the smiles.

Brake Trade Offs
A few years back the super-car makers discovered that they could make brake rotors from carbon-ceramic and other exotic compounds and create a fade-free brake. Fade is what happens when a brake rotor has been worked hard with frequent hard stops, has absorbed all the heat it can, and is asked to do more. Stopping distances start to get longer, then the rotors can’t take any more heat and they transfer it via the brake pads, then calipers, then to the brake fluid. Once that happens the brake fluid can boil. Then the brakes are not hydraulic anymore and they can fail. Lest you think this is all theory it is not. A new Asian sports car of some renown was on a track being tested by an experienced tester/journalist a few years ago and a crash happened due to this sequence of events. Changes were made to the car to prevent it from happening to customers.

The super-car makers all came out with brakes incorporating the new materials despite the huge cost and required redesign, and they worked great, particularly on the track. The reason they are not trickling down however is not the high cost. Rather, the magic rotors require so many changes to the other brake parts that the automakers have to re-create the whole system from scratch to incorporate them. Since the rotors won’t heat up quickly, special pads that do warm up fast are needed. Those pads won’t hold much heat so the calipers need to be bigger and heavier – or made of exotic materials themselves. Those hot calipers require special heat resistant brake fluid. So what started out as an improvement to the brake rotors of a road car for heavy use on the track, now has resulted in a brake system that is completely customized for track use and not really any better for road use.

Blind Spot Warning
Some new features claim to be about safety, but are actually about convenience. Most automakers now offer “blind spot monitoring.” This is a system that helps people to see the sides and rear quarters of their car without turning their heads or leaning forward a bit to use their side view mirrors. The idea is sound, but the Insurance Institute For Highway Safety (IIHS) says that now that the systems have been in the market for a number of years, there is no evidence that these systems prevent accidents. A safety system that does not prevent accidents isn’t really about safety. For that reason most automakers include these systems as options or in optional packages combined with other features.

Modern cars come with such incredible technology it is easy to take it for granted. Don’t be fooled by the hype around new features. Many come with trade-offs that are not easy to recognize.

Marvin McConoughey wrote on January 22, 2013 - 9:23am Permalink
This is an excellent and accurate analysis. Another tradeoff sometimes made to help pay for the latest, costlier, technology is to cut expenses in other areas. In the past two years some makers have reduced sound insulation. It takes a keen ear on a short drive to detect a reduction in quietness. But over the life of a car ownership, the shortfall becomes more apparent.
Three Deuce wrote on January 23, 2013 - 12:29am Permalink
Fairly comprehensive article on new technology/marketing and the upfront and collateral costs, John. Kudos! Deserves to be widely read, most likely won't. It should also be noted, that large diameter wheels/tires negatively effect handling/cornering. Regards...... Tre

Elon Makes a Cybertruck Statement With an Action, But Quiet in Words
Tesla's Record Month in China: Doubled Registrations in March 2021
END_OF_DOCUMENT_TOKEN_TO_BE_REPLACED