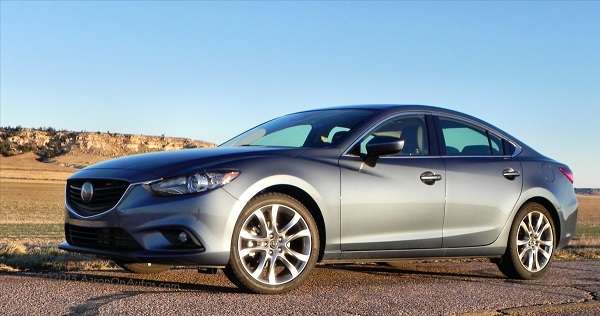 Mazda fans in search of a diesel will have to wait a little longer. Could it be that the Mazda 6 diesel is not green enough or efficient enough to beat the gas version?
Advertisement

Mazda announced today the Mazda 6 diesel, which had been scheduled for introduction here in the coming months, is not coming to America now, and Mazda does not have any timeline for the car to be introduced here. As an explanation Mazda said that “…the launch of its SKYACTIV-D clean diesel engine in North America is being further delayed from its Spring 2014 announced debut timing…it was decided that further development is required to deliver the right balance between fuel economy and Mazda-appropriate driving performance.” With regard to when the car might be ready Mazda says “Further information on the program, including a timeline of launch for North America, technical specifications and fuel economy will be available at a later date, closer to launch.” Something’s up and Mazda does not want to say what.

The current 2014 Mazda 6 sedan achieves an impressive highway mileage of 40 MPG with its gasoline engine. Its overall 32 MPG rating is also great for a relatively large family sedan. While not really a fast car, the automotive press is overwhelmingly impressed with the car and it is often cited as the best car in its class for enthusiasts. That class is four cylinder affordable sedans, not sports sedans. However, about a year ago word got out that Mazda had a great diesel engine that could make the Mazda 6 one of the most fuel efficient non-hybrids in America if it were introduced here. Mazda also took the diesel racing to keep fans interested, further develop the engine, and to keep the car in the headlines.

Mazda wants to market the diesel as a green car, and in fact calls it the “SKYACTIV-D clean diesel engine.” However, as we have often reported here there is no basis for diesels to be called clean or green. With regard to the green claim, diesels don’t emit less CO2 per mile than do their gasoline counterparts in the market. The 2014 Passat Diesel automatic can achieve 40 MPG highway and 34 MPG combined. It produces 290 grams of CO2 per mile, while the gasoline Mazda 6 automatic produces just 275 grams of CO2 per mile. So if diesels put out more greenhouse gasses it is hard to call them green cars. Furthermore, in each barrel of crude oil refiners can produce about 19 gallons of gasoline compared to about 11 gallons of diesel. Therefore, more oil is needed per mile to propel a diesel car. More oil used and more CO2 produced does not equal green.

We have also compared the cost per mile to drive a diesel versus a gasoline car and have found that in family cars the gasoline cars are less expensive. Diesel engines do sometimes have a slight edge in mileage over contemporary gasoline engines, but the fuel costs more. Typically diesel costs about 10% more than regular gasoline, which is what almost all mainstream passenger cars use today. More CO2, more oil used, and more expensive to drive is hardly a recipe for widespread success. Hopefully we will find out at some point exactly what the Mazda diesel can really do, but for now Mazda does not even have a launch date.

Mazda’s new diesel may be slightly more fuel efficient than Volkswagen’s but we have no US based test evidence that it is. Volkswagen has had the most experience with diesel vehicles in America in terms of number of models, years produced, and units sold. Mazda’s comments about the diesel not yet having the right balance of “fuel economy and Mazda-appropriate driving performance” makes us wonder if the car can’t beat the gasoline car’s already excellent efficiency and CO2 emissions.