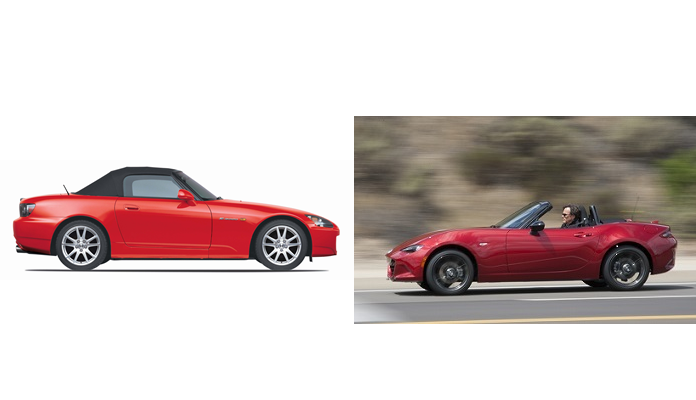 We compare the classic Honda S2000 roadster with the 2017 Mazda MX-5 Miata and see which car is quicker.
Advertisement

The new 2017 Mazda Miata continues the evolution of this iconic roadster. One way the Mazda Miata has evolved significantly is with regard to its straight-line acceleration. Let's face it; the NA and NB generation Miatas, with the exception of the rare turbocharged MazdaSpeed Miatas from Gen2, were not quick cars off the line, even for their eras. During the run of the NB, and for part of the NC Miata generations, Honda offered an exciting alternative and the promise of a significantly faster car, of course at a significantly higher price point. With the 2017 Miata still below the classic S2000's price point, we thought a look back at the performance might be fun.
- Related Story: Mazda Miata is faster than what car?!

2016-2017 Mazda Miata Performance 0-60 MPH
In 2016 Car and Driver was one of the first to discover that the new ND Miata needs only 5.9 seconds to run from 0-60 MPH. At this performance point, comparisons to many historically fast cars became fun. The Miata is faster than many older Corvettes, faster than many entry-level BMW 3 Series cars, faster than the original Lamborghini Countach. Given these facts, it is fair to hold the 155 hp 2017 Mazda Mita up to the 240 hp Honda S2000 to see just how they might have compared if they had existed in the same era new.

Honda S2000 Performance 0-60 MPH
The Honda S2000 first appeared in 1999 as a 2000 model year vehicle. At that time, the car came with an engine displacing two liters and producing about 240 hp in America. It was one of the most powerful non-turbo engines for its displacement that had ever existed at the time and still is.

Shortly after its introduction in America, MotorTrend instrument tested the S2000 and found it to have a 0-60 MPH time of 5.8 seconds. Impressive for the time given that it was faster than a Porsche Boxster. However, to achieve that time, MotorTrend had to launch the S2000 at 8,000 RPM and shift at 8,300 RPM. That is an extreme launch, to say the least, and pointed to the S2000's driving characteristics that required high-RPM operation to achieve any sort of performance. MotorTrend did the same test launching and shifting at 5,500 RPM and the S2000's time dropped to over 11 seconds!

Honda Changes S2000 Engine
Later Honda S2000 cars have a larger displacement engine of 2157 cc. Honda lengthened the stroke and reduced the redline of the engine a bit by lowering the RPM at which the fuel cut-off initiated. Power was now rated at 237 hp, but clearly, Honda knew there were real-world driveability issues that needed addressing. (Conclusion on Page 2)

In 2008, MotorWeek tested the Honda S2000 CR. That is the "Club Racer" trim that had the cool body panel behind the passengers' heads. The results were a 6.3-second run to 60 MPH by the special edition S2000. MotorWeek also pointed out they tested two S2000s on two occasions with the same results. However, we consider this one data point. Many consider the later S2000 cars to have a 0-60 MPH time of about 5.4 seconds, but full instrument test reviews by trustworthy publications are harder to find than one might think.

Conclusion - Which is Faster Honda S2000 or New Mazda Miata
Having read multiple reliable sources, and averaging the S2000s scores, we call this one a tie. Yes, there are examples of the S2000 running faster than the Miata by a fraction of a second when launched at over 8,000 RPMs, but there are also reliable sources who have the results above six seconds. The New 2017 Mazda Miata gives up almost 85 hp to the classic S2000, but its overall engineering is now superior. That the 2008 Honda S2000 in its top trim cost about $6,000 more than the modern-day Miata in its top trim is also a fact that is hard to ignore.