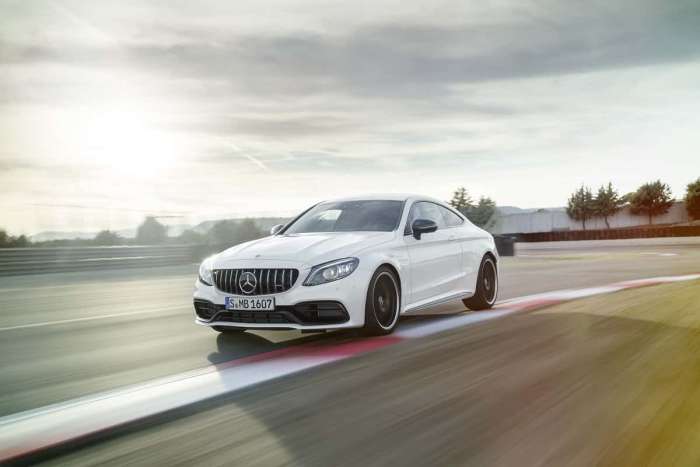 Which Cars Do Owners Most Often Ditch Within Their First Year? Fancy Ones

Fancy cars many of us would love to own are the ones that owners most commonly ditch during the first year of ownership. We dug deep to find out which are most commonly sold in a year, and why.
Advertisement

Publication iSeeCars.com has completed a new study examining which vehicles owners are most likely to ditch in the first year of ownership. Surprisingly, they are fancy ones that many of us would love to have. The Mercedes-Benz C-Class makes the list. So too does perennial enthusiast magazine favorite, the BMW 3 Series. And it's not just cars that owners can't wait to get rid of. BMW's X1 and X3 are also on the quick to ditch list.

Related Story: European vs. Japanese Cars: Why I switched From BMW X3 to 2018 Mazda CX-5

Why Do Owners Ditch Fancy Cars?
To find out which vehicles owners get rid of in the first year most often, iSeeCars.com analyzed over 46 million new car sales to determine how many of those new cars were subsequently resold as used within the first year of ownership. iSeeCars only included vehicles with at least 1000 miles on the odometer. The overall average for all models was about 3.4% being ditched in year one. As you can see, the results show that the top 10 models are given up more than 2.5 times the average vehicle and that fancy-pants models dominate the list. 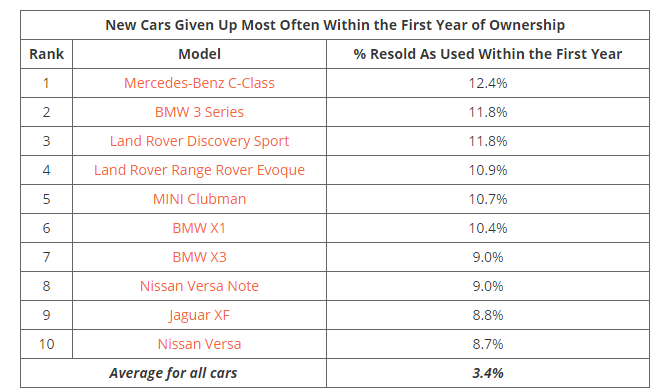 Why Are Cars Turned In After Less Than One Year?
Scot Hall, Senior Vice President of Operations at Swapalease.com, was kind enough to dispel our assumption. He told us, "1-year leases have never really existed at any significant level of volume and I’m not sure I have ever seen one through a major captive leasing company." He went on to add, "You may occasionally run across one that has been written by a small custom leasing company, but for all practical purposes 1-year leases are nonexistent."

So, if it is not a one-year lease coming to an end, why are these highly desirable vehicles being turned in before they are even one year old? Swapalease is a place where those with leases go to give them up and others come to find great deals on leases that have been turned in. It turns out Mr. Hall was the perfect person to ask about this topic. Mr. Hall told us, "Yes, we see people with high-end luxury vehicles wishing to transfer out after one year on a common basis and this is also true on non-luxury or lesser vehicles as well."

Scot Hall tells us that he finds three main reasons for owners wishing to turn in a car prematurely on a lease. They are:
1) Some sort of a lifestyle change that dictates the need for a different vehicle or no vehicle at all.
2) Financial reasons; both negative and positive.
3) They simply want a new vehicle because they like to switch cars often and/or some sort of new feature availability.

Mr. Hall says that there are a few common scenarios. "Imagine an executive is moving from the Midwest where a car is generally a necessity to NYC where a car is a liability in most cases," said Hall. "Or a young couple with a convertible learn that they are expecting, and the 2-seater drop top simply won’t hold their expanding family." He also says that job loss is, sadly, one reason some folks turn in a car after just part of one year.

Dealers' Loaners
iSeeCars CEO Phong Ly notes that there is another possibility that helps to explain why these popular German cars are sold within one year of "ownership." Mr. Ly says, “Another possible explanation is that BMW and Mercedes offer incentives to their dealers to buy new cars to use as loaner vehicles, which are then sold as used when they are still under a year old. In turn, this boosts the brand’s new car sales and introduces current customers to new models when they bring in their vehicles for service.” This also explains why primarily the "lower" models sold by BMW and Mercedes are at the top of the list, and not the more expensive ones.

Base Model Turn-Ins
Why does Mr. Ly think that the two entry-level Nissans made the list? "Both are among the lowest-priced cars in their segments, the Versa and the Versa Note do not have any of the latest standard safety features beyond the rearview camera and have basic no-frills interiors,” said Mr. Ly. “Drivers may opt for rival vehicles with more safety features or for a vehicle with a more stylish interior.”

For more information on the study by iSeeCars.com, please see the full study here.