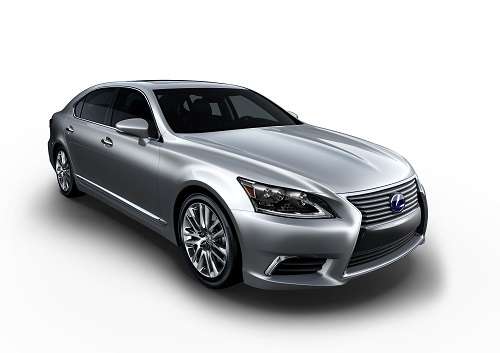 When in doubt ask "What would Brady drive?"

Tom Brady has ditched his Audi for a new Lexus LS600h luxury-hybrid. That got us thinking what the best large sedan in the world is at any price.
Advertisement

You are what you drive. If that is true, Tom Brady is powerful, efficient, classy, and grown up. If it is true for Payton Manning he is either a little better than average, not completely full size, and poorly adjusted, or a liar. Brady just switched from Audi to Lexus, and Manning of course drives a Buick Verano (or he pretends to, not sure which is worse). Brady having chosen the new Lexus LS600h got us thinking, what is the best sedan in the world at any price?

We heard about Brady making the switch from the Boston Herald*. The Herald is Boston’s independent daily tabloid that has a “blue colla” readership (the other is owned by a New York paper) and it nevah, nevah gets a story wrong, so we trust the source. Brady and G are royalty in Boston, and folks who live there don’t care much what the rest of the country thinks. After all, the locals call Boston the Hub, as in Hub of the Universe. If Brady is the unofficial King of Boston and the King picked Lexus as his mount, then clearly that is the current unofficial best big sedan in the world. This is a fun piece, but feel free to blast back your thoughts below.

Brady used to drive a big black Audi A8. He was once hit by another driver in a maxi-van while driving to the field. The Commonwealth held its breath until news broke that he was OK. Picking a full sized Audi instead of a compact car, like the one Manning says he drives, may have saved Brady’s life, or more importantly, his career. So we think it is fair to say for elite athletes cost should not be any consideration when choosing a car to drive to work in. It does seem odd that Tom Terrific picked a sedan instead of a brute-‘ute, but maybe he likes to roll low.

The main choices for best big luxury sedan are: Tesla, German, Japanese, Hyundai, or GM/Lincoln/Chrysler. It is interesting that Lexus got the nod from Brady, but not surprising. The Lexus LS600h has 438 horsepower. That will be more than enough to get you from the Back Bay to Foxboro down the expressway “wicked fast.” The Lexus also checks the required green box by having a hybrid drive. Sure it only gets an EPA estimated 19 in and around Beantown, but the thing weighs 5,200 pounds which more than Vince Wilfork. Some of that weight ironically, comes from the special “Hybrid” badges on the front, rear, sides, lights, and engine cover. The Lexus is all-wheel-drive, and it does have a cold weather package. If things get really hairy and Tom is headed into another snow-bowl, he can always call the Gillette field crew to send over the mini snow plow that helped the Pats win the game back in 1982.

If money was no object and you absolutely had to drive to work in the snow regardless of conditions, what sedan would you pick?

Thanks to Chis C (Christofa) and Youtube for the video.
*Herald Story