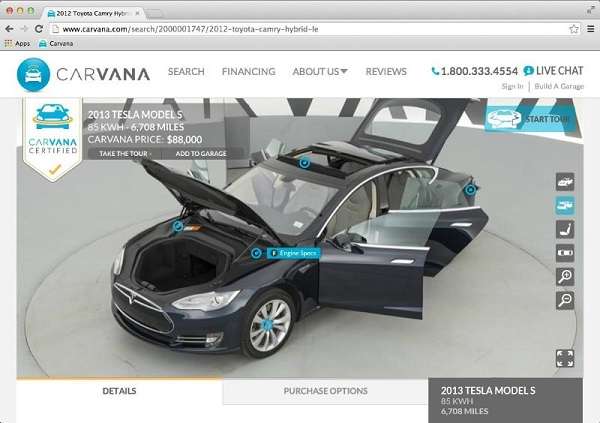 What will the used Tesla Model S market look like?

As the Tesla Model S enters its second year of production the car edges closer towards the used car market.
Advertisement

A recent press release and advertisement by Carvana.com highlights the unique way that Tesla Motors' Model S will merge into the used car market. Used Model S cars in volume are still a couple years away. However, as they start to trickle in, the odd differences between buying an expensive EV and a mainstream pre-owned car are starting to present themselves.

The carvana press release is really a publicity stunt. Apparently, the on-line retailer of used cars has a Model S for sale. A Model S - not a bunch of Model S cars. This is still unusual because in the US market there are roughly 24,000 Model S cars in private ownership ranging in age from 1 day to about 20 months old. Therefore, there are very few for sale used. To say there is a Certified Pre-owned (CPO) market for Tesla Model S cars, as we are used to with mainstream cars, is really not accurate since there is really no place to buy such a vehicle. Carvana’s acquisition of one to sell is therefore news (sort of).

Carvana.com says that the single Tesla Model S it has is the “first of several Teslas to be offered through Carvana.com, allowing car buyers to bypass long waiting lists in their home state.” Depending upon one’s home state this is true. Most new Teslas have a multi-month waiting period as buyers wait for Tesla to build and allocate a car to them due to their huge popularity, allocation of cars to other markets by Tesla, and a limited production capability. However, on the Tesla Owners Forums we follow, and based on our own first-hand experience, Teslas are available from inventory in some rare cases. Massachusetts is one location that this has been true at some points in time. Tesla has cars that it uses at dealerships for test rides and offers them for sale (as new cars).

One claim we have a little trouble agreeing with is Carvana’s claim that it is “the first online auto retailer to offer car buyers the ability to shop, finance and purchase Teslas 100 percent online.” It would seem to me that Tesla was in fact the first to do that. Indeed, all of its cars are sold that way to a large degree.

Another area we note that some might say is not accurate is Carvana’s claim that its single Tesla Model S 85 with about 7,000 miles is a “a significant savings against retail market average.” Remember, one challenge of buying any used EV is that there is no $7,500 tax deduction. Also, we are not aware of any states offering used EV rebates. Carvana has a delivery location in Atlanta, GA. Customers buying EVs in that state can enjoy up to $5,000 in state money when they buy a new Tesla. That means that a new Tesla with a price tag of $100,500 would compare to this used Tesla in terms of acquisition coast to a buyer in Atlanta.

Carvana’s press release says “Carvana Backs Tesla in Fight against Dealerships by Offering First Pre-Owned Tesla.” It then says that it helps customers “bypass the middleman, making Teslas available to consumers nationwide.” We are not really able to understand how in this case Carvana is not in fact the middleman.

If they are truly not a car dealership themselves customers should be aware of a significant tax issue related to their possible trade-in. Massachusetts for example allows a customer to reduce their sales tax on a new car by deducting the amount of the car that one trades in to a licensed car dealership. For example, if one bought a Pre-owned $100K Tesla from a licensed car dealer and traded a $50K BMW, the tax would be on only the $50K difference between the two. The sales tax on $50K in Mass. is $3125. That is a significant amount of money. It would be important to check if Carvana can offer this service. Presently, Tesla does not accept trade-ins. This could be an advantage to Carvana, but only if Carvana is a licensed car dealer in the state. Private party car sales do not reduce one’s sales tax in Mass. So customers that sell their car and then buy a Tesla from the Tesla Motors company pay the full sales tax on the new car.

It should also be noted that some other states actually allow buyers of new EVs to skip the sales tax. Worth checking to be sure that includes used EVs if you live in such a state. If so, that is one more way used EVs cost more.

Carvana.com also says that its Tesla “comes fully covered by the Carvana Certified 100-day or 4,189 mile bumper-to-bumper warranty and a 7-day "test own" return policy.” Although it would be nice to be able to bring the car back, Tesla’s bumper to bumper warranty is still in effect on the car Carvana is selling, so there is no real value to the warranty part of the offer.

Tesla is plotting its own path with regards to car sales. We see no obstacle too great for the company to overcome, but as of now, the used car market is completely undefined for Teslas. Maybe that makes it more exciting.

Mark B. Spiegel wrote on May 12, 2014 - 2:49pm Permalink
The typical wait time for a brand new Model S ordered anywhere in the U.S. has been only around six weeks for quite a while-- sometimes it's as fast as three weeks and other times as long as eight weeks, but either way, long U.S. waits and the myth of Tesla being "supply constrained" are things of the past.
John Goreham wrote on May 12, 2014 - 3:24pm Permalink
Thanks Mark. That is welcome news, sort of. My information is mostly from owners' FB posts reporting their new Model S has arrived and how long they waited. That is a "lagging indicator" if you will. On the other hand, if the car is no longer constrained by production, it means that the sales rate has leveled off or declined in the US. Here is our favorite source for Model S sales: http://insideevs.com/monthly-plug-in-sales-scorecard/