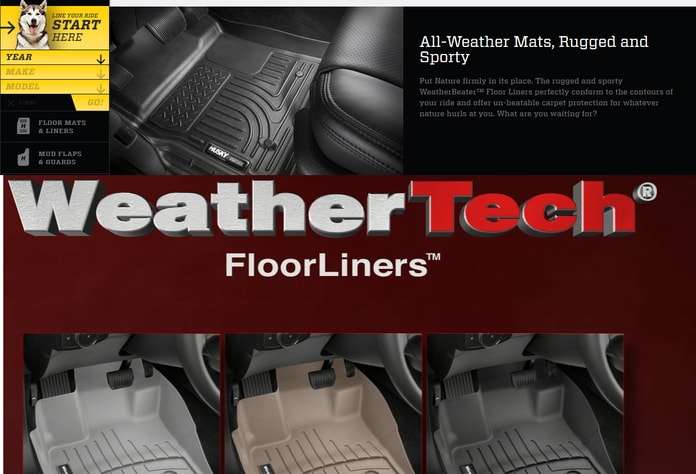 WeatherTech vs. Husky Liners – Which To Pick For Floormats and Cargo Liners

Two of the most popular consumer choices among those looking for floor mats and cargo liners are WeatherTech and Husky Liners. The custom-fit floor mat business was brought to maturity by WeatherTech about 25 years ago. Prior to WeatherTech diving deep into custom-fit manufacturing and widespread advertising, the default choice was overpriced OEM mats or the un-fitted mats hanging in the isle of your local big-box store or auto parts store. WeatherTech, a product produced by MacNeil IP, LLC, is now well known for their car magazine and car website advertisements and motorsports sponsorships.

WeatherTech vs. Husky Liners - Where To Find Them
Both companies now sell direct and also through distributor partners and dealers. Both are also on Amazon.com and have some products that qualify for Prime shipments (free two-day delivery). We scanned a variety of both brands’ product reviews on Amazon and for the most part, all seem to earn a very high 4.5 stars by the reviewers. However, there is a catch. We tested the Amazon selection system for a 2016 Subaru Forester and neither the Weathertech or Husky Liners worked with the on-line Amazon configurator. Perhaps your car’s specific year make and model will work.

WeatherTech vs. Husky Liners - Price Comparison
Next, we went direct and we input 2016 – Subaru – Forester at both the WeatherTech and Husky Liners sites. For the Forester's first row, the WeatherTech floor liners were $109.95. The second row was $69.95 and the cargo liner was $109.95. One can also select the first and second row together for the same total price as the two combined. All three were available in Black or Cocoa.

We then did the same search at Husky Liners. At this company, the first and second row were packaged together for $179.95. The cargo area liner was priced at $109.95. Therefore, the prices were the same. However, Husky Liners only offers black. Thus, WeatherTech has the advantage of offering more choices.

Our analysis so far was that both brands have the same prices and the same overall very positive reviews on Amazon. We then turned to Consumer Reports to see if the famous consumer advocacy group had rated car floor mats. No luck, but if you need advice on how to rid yourself or a child of lice without using prescription lice medicine there is a helpful new posting (sarcasm).

WeatherTech vs. Husky Liners - Response to Inquiries
To break this tie we then went to the “Contact Us” page of both brands. We found an e-mail for WeatherTech and a fill-in-the-blanks type form on Husky Liners’ page. We wrote to each “I'm planning to publish a story on interior floor mats and trunk liners. I'd like to ask you if you could offer two reasons for customers to choose WeatherTech over a competitor like Husky Liners, what would those two things be.” WeatherTech’s reply came the same day and was, “1. WeatherTech FloorLiners/cargo liners are laser measured for an exact fit to each specific vehicle and utilize the factory retention system. 2. WeatherTech products are not only aesthetically pleasing in today's modern vehicles but are made in America, by American workers on tools that are produced in-house with American sourced raw materials.” Husky Liners did not respond to our inquiry after 10 days.

Conclusion
Based on our comparison, WeatherTech has an edge in product choices and also in response to “Contact Us” inquiries.

*Author note: The author owns a 2016 Subaru Forester with OEM mats and a Weathertech cargo liner. Torque News received no free products or advertising revenue from Weathertech or Husky Liners for the publication of this story.

Elon Makes a Cybertruck Statement With an Action, But Quiet in Words
Tesla's Record Month in China: Doubled Registrations in March 2021
END_OF_DOCUMENT_TOKEN_TO_BE_REPLACED