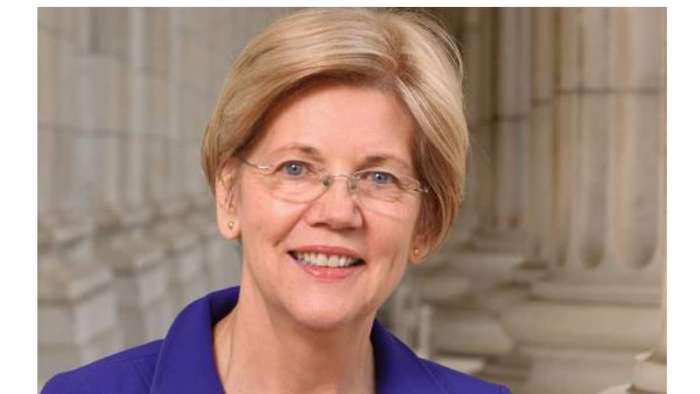 In an odd twist topping off a successful year for Elon Musk, a liberal United States Senator from the Commonwealth of Massachusetts has taken to both television and Twitter to call him a “freeloader.” This follows liberal publication Time Magazine anointing Elon Musk as “Person of the Year.” 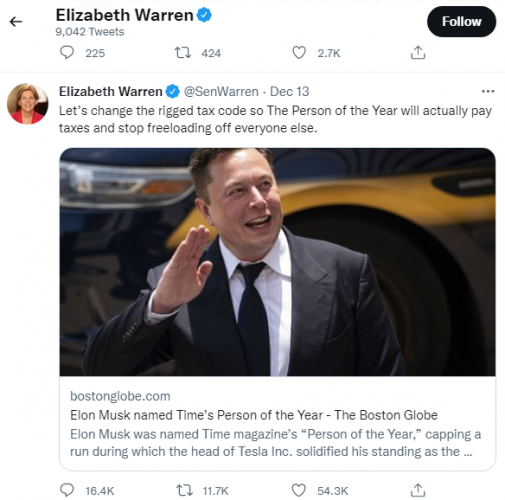 On December 13, 2021, Senator Elizabeth Warren, Senator (D) for the Commonwealth of Massachusetts, tweeted, “Let’s change the rigged tax code so The Person of the Year will actually pay taxes and stop freeloading off everyone else.” The tweet was odd for a couple of reasons. First, Senator Warren’s political party presently controls the House, the Senate, and the Presidency. Her party could make changes to the tax code tomorrow to right any wrongs that she and her party feel are reflected in tax law without a single vote from the opposition minority party.

The second odd aspect of the tweet is that it comes months after it was made known that Elon Musk faced what is perhaps the single-largest person tax burden due in United States history. Months ago, the internet and financial talk programs on multiple media began a discussion about how large Elon Musk’s tax bill would be in 2021. Estimates range from 8 billion to 15 billion. The tax is largely a result of Musk’s stock in Tesla, Inc. a company he joined shortly after it was founded. Musk is the current CEO of the company.

Not satisfied with this apparent defaming of Musk on Twitter, Senator Warren re-stated her position on an MSNBC program hosted by Joy Reid. Ms. Reid teed up the Senator with an introduction in which she said, “Musk is, I mean he’s the worst.” This occurs at time stamp 0:12. At time stamp 2:35 Senator Warren is prompted to comment on Elon Musk and she says on the video, “The world’s richest freeloader.” She adds that Mr. Musk has a thin skin. Later she says, “When these guys not only get to rake it all in but they rub everybody else’s nose in it. While they head off into outer space and declare that they did this all on their own.” For the record, Mr. Musk has never been to space. He owns one of the planet’s largest space transportation companies and is a supplier to the federal government. Senator Warren then says that these strawmen were “subsidized” by taxpayers. She may be referring to electric vehicle federal income tax subsidies. Tesla buyers do not presently receive any federal income tax incentives on Tesla vehicles. They did in the past.

Senator Warren in the interview then goes on to name a list of the types of employees that paid less than Elon Musk in “federal income taxes.” The Senator is bringing to light a complaint that many progressives have about the tax code. In some cases, owners of companies don’t take a paycheck. Thus they have no federal income tax due. Instead, the company owners rely on the gains from the equity they hold in a company as their source of wealth and income. That income is realized when stock is sold typically. This added equity is taxed.

The companies that Mr. Musk owns or has an ownership stake in (SpaceX, The Boring Company, etc) also pay and generate a list of taxes so long it is hard to know where to begin. Property taxes and payroll taxes are just a pair that jump to mind. The products that the companies produce also generate state and local sales and excise taxes. The workers that are employed by the companies also pay income taxes to the federal government and in some cases, to the states in which they work.

Since Mr. Musk was hired by Tesla’s two founders as one of the early employees, and then brought in as an equity holder, Elon Musk has seen the company grow from a value near zero to being one of the largest companies on the planet by market capitalization. At one point, Mr. Musk told an interviewer that Tesla was “near death.” 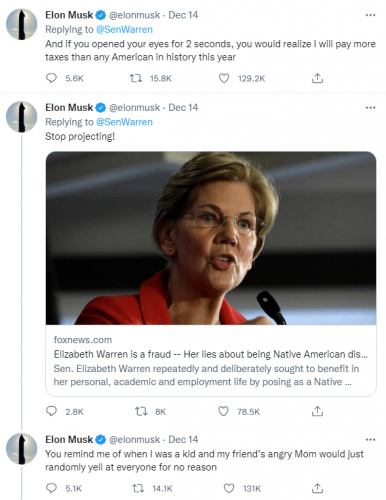 In response to having been called a freeloader multiple times by an elected official, Mr. Musk replied on Twitter to Senator Warren. You can view the tweet replies above courtesy of Twitter.

Feel free to add your own comments below. Tell us if you think it is possible to pay a fair share larger than any other person. Tell us if you feel Mr. Musk paying billions in taxes is unfair and why.

Mark Day wrote on December 24, 2021 - 11:35am Permalink
Excellent article, revealing the truth. Individuals like Warren feel their inferiority of not producing anything of value, but instead complain and tell others how to live.
Steve smith wrote on January 9, 2022 - 2:19pm Permalink
She has always been a bit mixed up. After all, she certainly has so little native American in her to quify as Native American. But face it: confusion is Rampent: Joes supposed to be competent, Kamala black, Opra opressed, Gearge Floyd a Hero . That said that freaking looser is no hero to any but the Marxist BLM promoters and idiots on the left buying this rhetoric as well as American public who have been lied to by mainstream media partners of the Democratic Party while helping to do George Soros and Speaker Stretchmark's biding. Elizebeth Warren is the true freeloader as are the rest of career politicians. Term Limits are NEEDED and a needle and thread to sew that worthess frumpy old hag's mouth SHUT? Way to to go Elon you put that worthless old hag of a true freeloader in her place-- Last Place! These comments coming from A true "TAKER", certainly not a giver , someone who's never produced anything but marxist rhetoric.