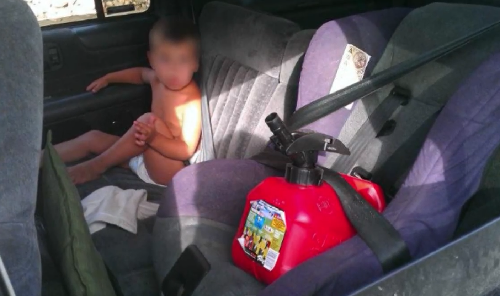 One mom is run over and another is in legal trouble after two terrible decisions.
Advertisement

We all remember the video of Brittany driving her 2-seat convertible with a baby on her lap. That image now takes a back-seat to the one shown here. According to multiple sources including 9 News in Colorado, a vehicle with four occupants, none of them belted, was stopped for making an illegal turn. During the stop, the photo was reportedly taken by the police. Inside the car was a toddler, unclothed, but for a diaper, “improperly restrained.” Next to the child was a gasoline container in a child car seat, apparently strapped in. Setting aside that the child should have been in the seat, why would any parent transport liquid fuel in a car with children inside?

In a tragic story, the Houston Chronicle is reporting today that a woman was run over and killed by an SUV being driven by her 12 year old daughter. The report says that the woman, a mother of six, had stopped her Chevy Suburban at a home listed for sale. When the mom parked the car she thought she was too far back and instructed her 12 year old daughter to move to the driver’s seat and pull the car up a bit. The story claims the mother said told the daughter to move forward and to brake when instructed. The daughter moved the car forward, but when the mother instructed her to brake, she instead applied more gas. The mother was subsequently knocked down and then run over by the vehicle being driven by the daughter.

In the United States about 4,000 of the approximately 32,000 vehicle related deaths are pedestrians. Many of those killed are are intoxicated. In an effort to prevent deaths by vehicle strikes the government has mandated specific requirements for automotive hoods and front surfaces. Some automakers, such as Volvo, have gone far beyond that and now offer lifesaving features that can actually prevent a pedestrian from being run over by a car. For example, the Volvo XC60 sport utility vehicle can come equipped with a collision prevention system that automatically applies the brake if something is in front of the vehicle. The New Infinity JX has a similar technology that works when the vehicle is backing up.

Despite incredible safety technology available to help us, the most important safety mechanism still resides between our ears.

Photo courtesy of KIDgrownup via Youtube.com