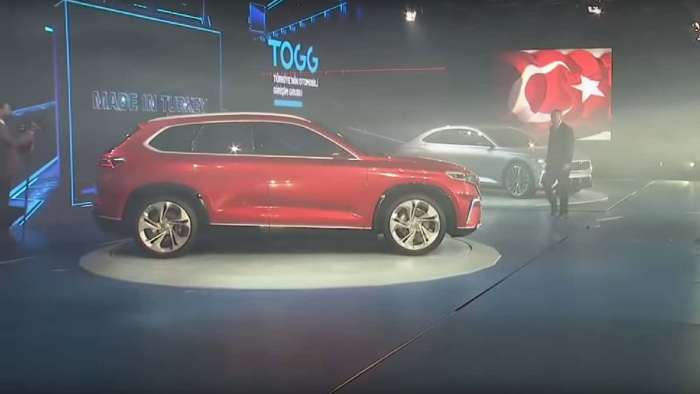 Elektrikli araba. That's "electric car" in Turkish. We bring it up because the country of Turkey has decided to build a series of 15 electric car models from a platform that a country-sponsored consortium called TOGG is developing for domestic Turkey production.

TOGG is short for Türkiye'nin Otomobili Girişim Grubu or in English "Turkey’s Automobile Initiative Group." and is made up of five Turkish companies including, Anadolu Group, BMC, Kok Group, cell phone company Turkcell, and Zorlu Holding, the parent of TV maker Vestel. The consortium has as its head of operations former Bosch executive Gurcan Karakas and its COO is is Sergio Rocha, a former General Motors executive who led the company's Korean operations.

The new EV line was introduced by Turkish President Tayyip Erdogan. At the unveiling, he made it clear that this vehicle is to be an example of more domestically-produced technical products that the country hopes will find buyers not just in Turkey, but in Europe and beyond.

Wisely, TOGG is planning to launch a compact crossover first. Crossovers have been exploding in popularity in Europe with vehicles like the VW Tiguan and Nissan Qashqai breaking into the top-ten in sales surrounded on the list by hatchback vehicles. Crossovers are taking share from compact cars in Europe steadily.

Timeframes for EV "launches" are nearly meaningless. However, we will dutifully report that TOGG plans to be selling a crossover by 2022 and that the government is seeing a timeline as long as 2035 for full introduction of the new EV line.

For more information on this topic please see Reuters' story.

Armen Hareyan wrote on December 30, 2019 - 3:16pm Permalink
This is very interesting John. I read about Turkey's first electric cars a few days ago in the local media. I am glad you covered Turkey's first domestic electric crossover.
Martin Winlow wrote on December 31, 2019 - 4:09am Permalink
Whatever happened to the 'Turkish national car project' a tie up with NEVS who own(ed) the remains of SAAB cars to produce 9-3-based EVs for Turkey? (saabplanet.com/turkish-minister-confirmed-we-bought-all-the-rights-to-the-saab-9-3)
John Goreham wrote on December 31, 2019 - 9:44am Permalink
Excellent question Martin. As you may tell from a close reading of our story above we hint that any new electrified vehicle timeline is now considered questionable by us. "Timeframes for EV "launches" are nearly meaningless." The last we heard, the 9-3 NEV mashup was due by the "end of 2019." So there are still a few hours left to be on time...