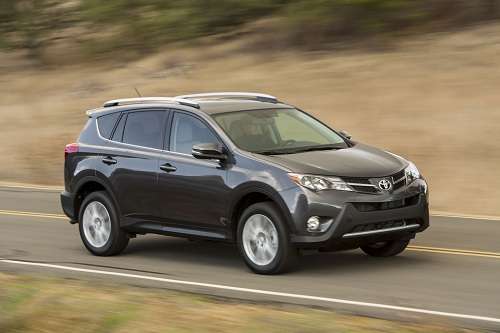 Toyota unveils the 2013 RAV-4 which now fits the mold

The Toyota RAV-4 always had some quirks, but for 2013 they have been beaten out of the newly designed Cute ‘ute. Formerly in a class it built for itself, the new RAV-4 will be very similar in all ways to the Honda CR-V, Ford Escape, and the Subaru Forester. That is not necessarily a bad thing, but the RAV-4 always had its own personality and that is now over. At Torque News our job is not to tell you what cars are good or bad, but to tell what things make the cars what they are. What defined the RAV-4 were four distinct differences between it and the competition.

First, let’s start with the negative things that Toyota has eliminated. Number one is the ridiculous side-swing door. This was perhaps thought to be helpful in some way, but if so, it was never apparent. At the local transfer station (dump) we used to watch as the folks burdened with this feature would swing it out and then work around it. It swung out in a way that blocked the user from getting stuff out and to the curb without walking around the outstretched door. Everyone else in the place had the usual upswing door designed that way for a reason. Number two on the list was the externally mounted spare that was mounted onto the terrible side swing door. It made a badly designed door heavier. The “Continental kit” style spare has no place on the RAV-4. Can we all stop pretending that it is an off-road vehicle? On true Jeeps the external tire has a purpose. It allows the tire to be accessed easily in an off-road scenario where tire damage is likely. Toyota tried to fix this flaw with the “Sport” version, which came with a repair kit instead of a spare. Insult to injury if you ask us. These two design flaws have been resolved by doing what every other maker of vehicles like this does. Hide the spare in the cargo floor and make the tailgate swing up.

Now let us lament the two things that made the RAV-4 better than the competition that Toyota has eliminated. First it had two jump seats perfect for little kids. They were almost vestigial seats, but if you wanted to take the grandparents to dinner with your two or three kids, you could do it. Now granddad has to drive the Buick to the restaurant (Where’s my glasses. Has anyone seen my glasses?!) Those two seats also enabled the RAV-4 to be a great emergency car-pool vehicle. Two extra kids to take to soccer? No problem. They are now gone and the RAV is a 5 seater. The reason is the real kicker. Toyota listened to numbskull car testers that constantly pointed out that the two jump seats were “too tight for our tester.” Who is a 50 year old guy with a beer gut. Second, the RAV-4 when optioned with the V6 was a “sleeper.” It was a fast vehicle that looked like a common car. In fact, the RAV-4 was Toyota’s fastest vehicle in a sprint. It could even out-hustle the Camry which had the same V6, similar weight, but only 1 wheel drive. And there was so little penalty for the six. It got great mileage for its class. Now only the Acura RDX has a six. And it gets almost the same highway mileage as this new RAV-4 with a four cylinder engine.

Those are the four things you are not reading at other media outlets. They will tell you it has a fresh new look (of course). They will tell you the exact horsepower of the 4-cylinder engine and that the all-wheel drive system has been optimized for fuel economy.

The RAV-4 used to be the gal in class with that special something and quirky clothes. Now she is just a wholesome, reliable gal, like so many others.

Where are my glasses wrote on November 29, 2012 - 10:04pm Permalink
Great to see the spare wheel under the floor rather that than seats and a puncture can. The reason the six is gone is the truck is too light to tow and too high for safe highspeed driving.
John Goreham wrote on November 30, 2012 - 5:58pm Permalink
You're spot on. If my Highlander quits I would have to drive this great looking little cute ute and see if I can live without the V6 power. This is a good looking vehicle inside and out. I wish it kept the rear jump seats. My 2007 Highlander is almost exactly the same external dimensions as this RAV-4 and has the jump seats, and it also has a full size, matching spare on a matching alloy rim.

Tesla's Record Month in China: Doubled Registrations in March 2021
Does a Tesla on Autopilot Follow The Speed Limit?
END_OF_DOCUMENT_TOKEN_TO_BE_REPLACED