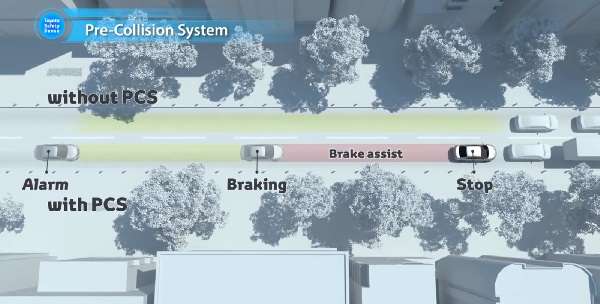 Toyota announced this week that it would move to incorporate important new safety technology on more models to boost overall fleet safety. Toyota plans to roll out two new safety suites. On compact cars the package will be called Safety Sense C. On mid-sized and larger the package will be called Safety Sense P. The main idea is that this technology will be manufactured more cost-effectively, and that Toyota will begin to add the content on a much broader scale than the industry standard. Presently, forward collision prevention systems ar on about 15% of Avalons, 10% of Prius vehicles, and just 5% of Camrys.

New Safety Systems Starting 2015
In its announcement Toyota says that the “packages, (will) be launched in 2015 and rolled out across most passenger models and grades in Japan, North America and Europe by the end of 2017. Both packages will be made available at price levels chosen to encourage widespread use.”

Toyota Rear View Cameras
Toyota is already leading the industry by placing a back-up camera on every 2015 Camry. The Camry is the top selling car in America. Toyota also puts a safety camera in three of four Corolla model trims (including the top selling trim). The Corolla is the leading seller in the compact sedan class in the US. The National Highway Transportation Administration has mandated that every vehicle be equipped with such cameras by 2018.

IIHS Top Safety Pick Plus
Innovative safety systems that are not included in your car do not help you. This may seem obvious, but the industry’s leading safety testing organization, the Institute for Highway Safety, ranks cars based on their optional equipment. For example, a vehicle that offers an optional forward crash prevention system will be tested with that technology. If it scores “good” on all its crash tests and “acceptable” or better on the small frontal overlap test, it will receive the highest rating called Top Safety Pick Plus.

Optional Safety
Manufacturers then advertise that their car has this rating as if all the ones on the lot do. They don’t. For example, I have tested both the 2015 Subaru Outback and also the 2015 VW Golf, both IIHS TSP+ rated cars, yet neither of my test cars had the forward crash systems.
The video below illustrates the way the new Toyota systems will work.

LG's New EV Battery Plant Is a Welcome News for Tesla
Tesla Giga Berlin's New Hurdle: It's Not Only the Gov't, but Now Tesla Itself
END_OF_DOCUMENT_TOKEN_TO_BE_REPLACED