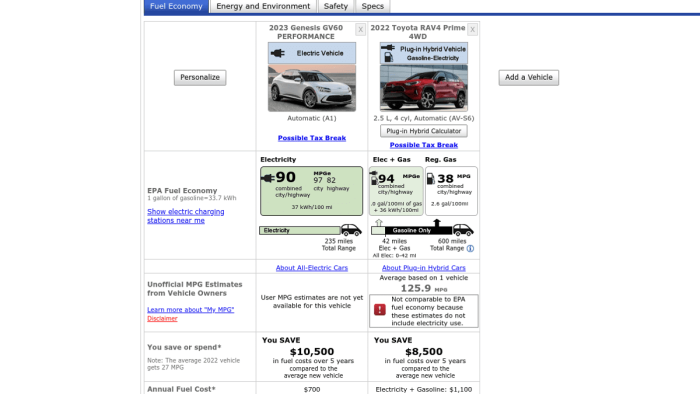 Two crossovers of similar size, but the plug-in hybrid has a better efficiency rating? Yes, and examples like this are only going to become more numerous.
Advertisement

Two of the very best all-wheel drive crossovers available this year are the all-new Genesis GV60 and Toyota RAV4 Prime. Each comes with a plug, and each has segment-leading acceleration. In fact, each is the quickest crossover each company makes. So how did the Toyota RAV4 Prime, which can burn gasoline in certain modes, end up being the one with the better EPA rating?

Weight is one reason. Because the Genesis GV60 is carrying around a massive high-voltage battery, its weight is nearly 5,000 pounds. Mass has a penalty when it comes to efficiency, and the Genesis GV60 Performance pays the price. The RAV4 Prime plug-in hybrid-electric vehicle (PHEV) by contrast, has a weight about 600 pounds lower. This despite it having both electric motors and a gas engine to “carry around.”

The EPA rating for electric vehicles is Miles Per Gallon Equivalent, MPGe. It’s an imperfect unit of measure, just like MPG is in conventional vehicles. The EPA uses it so that shoppers can compare various models to one another when they are looking for a new vehicle to buy. Higher indicates a higher efficiency and a lower cost of energy. So higher is better. The RAV4 Prime’s MPGe rating is 94 MPGe and the Genesis GV60 Performance’s is 90 MPGe.

The idea was that the vehicle with the higher MPGe would cost owners less for energy than would those with a lower rating. However, it doesn’t really work that way when gas is around five bucks. Although the GV60 has a lower MPGe rating, it actually costs less per year than the RAV4 Prime for energy. This is because the EPA averages both gasoline and electric operation of the RAV4 Prime. When the RAV4 Prime is not being operated in EV-only mode, it operates as a 38 MPG hybrid. The EPA’s estimated annual cost for energy for the GV60 is $700 per year and the estimate for the RAV4 Prime’s combined electricity and gas costs comes to $1,100. But wait, there’s one more twist.

The GV60 Performance is a bit quicker than the RAV4 Prime. It can sprint to 60 MPH in about 4 seconds and the RAV4 Prime takes about 5.5 seconds to do the same sprint. By any measure both are quick. However, when it’s time for a road trip, the RAV4 Prime has a range when fully energized more than double that of the GV60.

EVs started out cars, but fewer and fewer consumers want a car. What they really want, and buy in overwhelmingly larger numbers, are trucks and crossover SUVs. The trend for MPGe numbers as EVs start to appear in the shapes and sizes consumers really want is for MPGe numbers to be ridiculously low. The new F-150 Lightning has earned an EPA rating of 66 MPge. The coming GMC Hummer is reported to have an MPGe rating of just 47. Just how low EVs will go in terms of miles per gallon equivalent is anyone's guess.

The conventional wisdom is that battery-electric vehicles are the only logical choice for reducing carbon emissions. If only it were so simple in the real world.