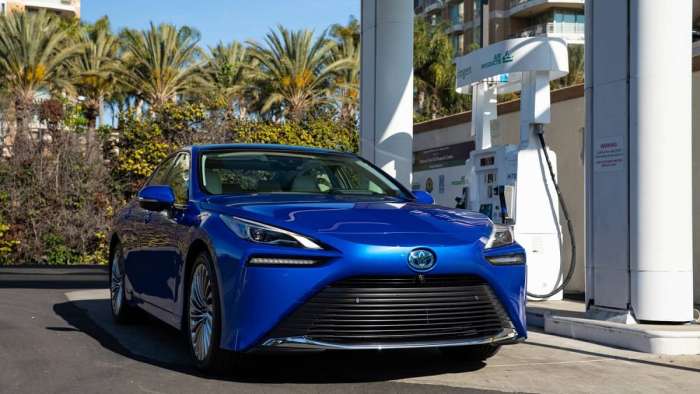 Toyota fuel cell electric vehicle is held in disdain by many battery-electric vehicle fans. The uncomfortable truth is that Toyota’s FCEVs outsold the BEVs from most brands in 2021.
Advertisement

The fuel cell electric vehicles (FCEV) being developed by General Motors, Hyundai, and Toyota are the objects of ridicule by many battery-electric fans and advocates. Like plug-in hybrids, this green vehicle solution with zero tailpipe pollutants seems threatening to the EVangelists somehow. Don’t mistake this article for one praising the idea or practice of creating fuel cell electric vehicles. Rather, let’s look closely at just how few battery-electric vehicles most brands delivered in the U.S. market by using the Toyota Mirai FCEV as our yardstick.

Toyota Mirai Deliveries In 2021
In 2021 Toyota reported strong growth of its green-powertrain-equipped vehicles. Toyota reports that among its 583,697 green powertrain-equipped vehicles it sold in 2021 Mirai FCEV deliveries accounted for 2,229 units. That’s a growth rate of over 400% in a year when most manufacturers’ total deliveries dropped drastically. Toyota is conducting quite a bit of hand-holding for the owners that it sets up with Mirais. We are not pretending otherwise. We are quite aware that you are more likely to be hit by lightning than to drive past a public hydrogen refueling station in America.

Notable BEV Deliveries In 2021
Many manufacturers made important gains related to electrified vehicles in 2021. Notably, Tesla, which continues to add manufacturing capacity by the gigas. Ford and VW both launched and delivered a meaningful, yet very small by any measure, volume of crossover battery electric vehicles. Hyundai broke the ice by delivering a handful of its new IONIQ5 cars late in the year, adding that model to the handful of Niro and IONIQ cars it delivered. Mazda also broke the ice, delivering its new MX-30 to 181 California residents. Rivian and Lucid delivered a small number of BEVs. How small? They don’t highlight the delivery numbers on their own media pages. MINI launched its Cooper SE in 2021, and we even had a chance to try one out. Include MINI in the brands that build BEVs right now. That’s pretty much the end of the good news with regard to BEV deliveries for 2021. 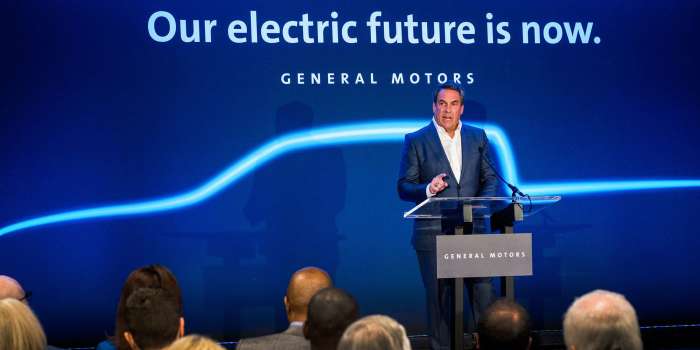 GM BEV Deliveries 2021
Here’s some bad news. GM delivered just 24,828 battery-electric vehicles in America in 2021. That’s more than Toyota’s Mirai for sure. But not in Q4. In the last quarter, GM only delivered 25 BEVs. Mirai topped that. Wasn’t GM the company that told us three years ago its all-electric future was NOW?

Toyota Mirai Outsells Tesla Model X
Tesla’s overall year was fantastic. Amazing. Fantabulous. Its progress in almost all areas cannot be overstated. Except that, by our estimates, the Toyota Mirai outsold the Tesla Model X in 2021. During 2021, one setback for Tesla was that its combined deliveries (globally) of the X/S lines fell to about one-quarter of its former peak of sales which happened five years ago. There are many good excuses for this. But… Mirai seems to have passed Model X in deliveries. We’d tell you for certain, but like some manufacturers, Tesla doesn’t want you to know its deliveries by model or market.

Hyundai, Kia, Nissan
Here’s some more bad news. Hyundai and Kia delivered so few EVs that they don’t include the numbers in their annual delivery reports. Nissan delivered about 14,000 Leafs in 2021. Nealry the exact number it sold in 2016. We commend Nisson for remaining in the game for a decade with a model that sells at a rate of less than 1,500 units per month. But with ten years of experience in the market and two and a half generations of Leafs, all of which had both customer-facing and manufacturer-facing incentives of many thousands of dollers per unit, has the Leaf proven that affordable BEVs can work, or that they can't work? It seem that is open to debate.

Brands With Little Or No EV Sales In 2021
However, beating up on companies that actually deliver a BEV is also not what this story is about. The brands above are the ones at least making a token effort (or heroic effort in the case of Tesla). Let’s talk about some other brands for just a bit. Subaru didn’t sell any BEVs in 2021. It may re-badge some Toyota BEVs this year if all goes well. Lincoln, Jeep, Chrysler, and Mitsubishi have some PHEVs for sale in small numbers, but no BEVs. Honda moved to kill off its Clarity line off due to overwhelming customer love for the car (not kidding). Volvo is all about electrification. Given the brand’s many messages about its turn to electrification, one would assume that it sold gobs of BEVs in 2021 in the U.S. Nope. 755.

Without hurting our brain doing too much math, by our count, Toyota’s hydrogen fuel cell electric vehicle out-delivered the combined BEV deliveries by about a dozen prominent brands in America this past year. If Mira was its own brand it would have outsold the BEVs delivered by Lucid, Rivan, Mazda, and Volvo combined based on the hazy delivery information provided to the media.

2022 may be a better year for battery-electric deliveries. It will be interesting to see how many brands’ BEVs the unloved Mirai fuel cell electric vehicle outsells in the twelve months to come.