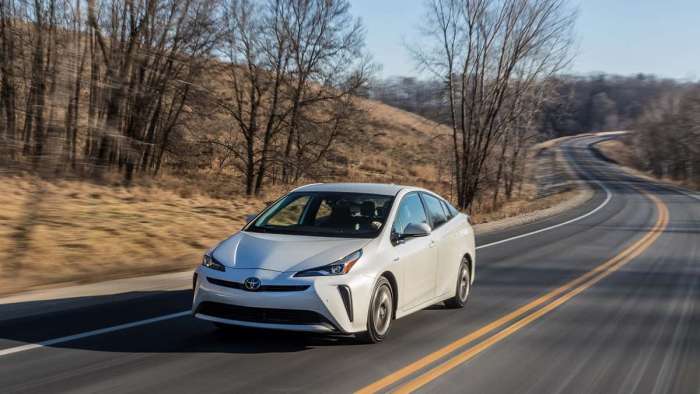 While some publications write the obituary for the Toyota Prius, the car continues to outsell car models at a long list of popular brands. Here is a quick list of companies that don't have any car model that outsells the Prius in America.
Advertisement

The Toyota Prius has been the most popular selling car model in many key states, including in California. Alas, with so many outstanding new cars available on the market, many selling alongside the Prius at Toyota dealerships, and an overall shift to crossovers, the Prius has seen some sales declines. Yet, Toyota handed the keys to 8,261 new owners in the month of August, up from 8,111 the prior August.

We realize many readers have no idea what a solid monthly sales volume for a vehicle is, so to provide some perspective we have assembled this simple list. Here is a list of the car companies that don't have a single car model that sells as well as the Prius. And keep in mind, the Prius isn't Toyota's top-selling car, nor is it Toyota's top-selling green vehicle. Toyota sold 13,881 RAV4 Hybrids in August and its top-selling car model was the Camry with 31,986 units sold. Both were up over last August.

As you can see, the Prius remains a relatively high volume car in terms of sales. 13 brands we can come up with quickly have no car model that can top the Prius in sales. That includes three affordable brands. If the Prius were a Ford model, it would be the brand's second-best-selling car after the Fusion. If it were a Volkswagen, it would be neck and neck with the Jetta (9,500 in August). If it were a Chevy vehicle, the Prius would be the second best-selling car in the lineup after the Malibu. Of course, the Prius outsells all the cars at Porsche, Ferrari, McLaren, Lamborghini, Alfa Romeo, and Maserati. Those are not major brands though, so it isn't fair to make the comparison.

The Prius, like almost all car models, has been passed by as crossovers take over the sales lead at most brands.
This is just as true at Toyota as it is at other vehicle companies. That doesn't mean the Prius isn't a high-volume vehicle, or that it is unprofitable for Toyota. In fact, the opposite is true. Now in its third decade of sales, the Prius continues to be one of the most successful cars sold in America. As proven by the sale figures above.

Related Story: The Other Cars Toyota Prius Owners Drive May Surprise You, Sorry if it Ruins Your Stereotyping