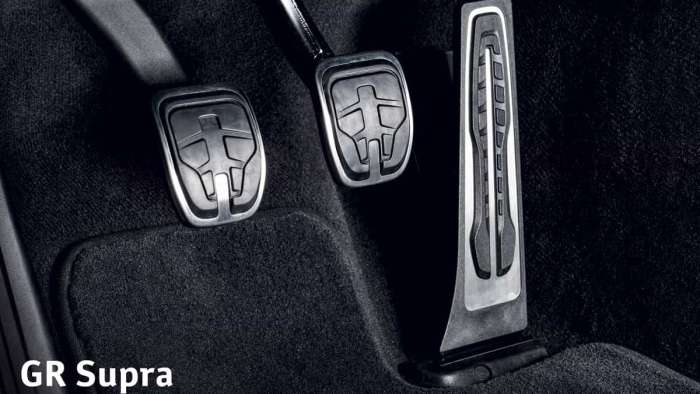 The Toyota GR Supra is now available with a manual transmission. Why now?
Advertisement

Toyota says that it has listened to its fans, and will now begin offering its GR Supra with a manual transmission. While this is great news, why didn't Toyota listen to its fans back when the current generation GR Supra was in development, for what seemed like a decade?

Fans of rear-wheel-drive sports cars love manual transmissions. While they often make the car a bit slower on paper, they sure are fun. Everyone loves to shift a true sports car, and matching revs on downshifts is a skill so few have anymore it is really an exclusive club in which to belong. The Supra was available with a stick from its inception in the late 1970s, when it was birthed from the Celica, which of course, also came with a stick.

Toyota said in a statement, “Developed to meet the demands of driving purists, the upcoming Toyota GR Supra Manual Transmission has been engineered to offer enthusiasts something closer to the GAZOO Racing DNA that also enhances the driving experience.”

The owners of a rare Supra manual will be able to signal to their brethren that they are an upstanding member of the super-secret Supra stick shift society by sporting a special red badge on the back of the car.

Toyota hasn’t said much more about the new Stick Shift GR Supra except that we should watch for more updates in the coming weeks. So check back to Torque News or the 2020+ Toyota Supra GR Owners and Enthusiasts group on Facebook for details as they are provided.

Is a stick shift GR Supra of interest to you? Tell us why or why not in the comments below.

Images of GR Supra by Toyota