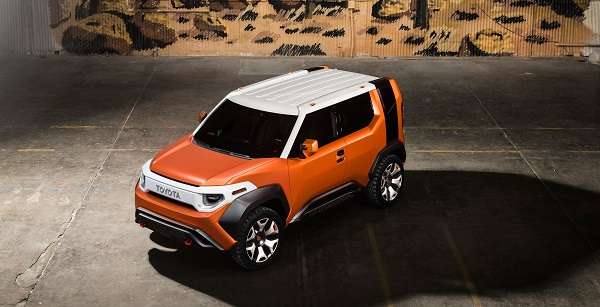 Toyota FT-4X Facts and Figures
The Toyota FT-4X Concept is a crossover that has a look similar to a Kia Soul. It is about 72 inches wide and 167 inches long and 64 inches high. So it about the same size a Kia Soul as well, but about four inches longer. The FT-4X rides on the same 103.9-inch wheelbase as the new 2018 C-HR subcompact crossover, so we assume it shares most of that two-wheel drive vehicle's running gear and basic platform.

As of yet, Toyota has not said what engine a production FT-4X might have. However, the company does say it will be a 4-cylinder engine and hints that it will have low-end torque, which means turbocharged.

Toyota FT-4X Styling
The "X" styling is shown throughout the design in the new FT-4X. It can be seen in the front, rear, and sides of the new vehicle. Watch the designer explain it in the video below if it is not apparent to you (it was not to us).

Inside, the amazing Toyota Calty design team really went to work. It is in the detail we see here that we find the real hint that this vehicle may make it to production. The vehicle has a very elaborate rear storage compartment and the overall instrumentation is unique as we explain in our next section.

FT-4X Surprise Tricks
The new 4x4 from Toyota is full of surprises inside. For example, the rear hatch opens multiple ways for multiple reasons. Inside controls kick it old school in one sense. They are not all touch-operated, but rather, push, pull, and twist. Your cell phone becomes the information display in front of the steering wheel. Toyota says that you can just use its awesome mapping apps, rather than pay them $1000 for a bad one. There is a removable armrest that turns into a sleeping bag, a dome light that becomes a flashlight, water bottle door handles and hot and cold storage compartments.

FT-4X - Will It Be A Production Model?
We say, "Yes it will" to this question. Off-road vehicles that people drive in the city are all the rage (see Mercedes G-Wagon). The only real question is will the cool features survive or be lost in translation? (Video on page 2)