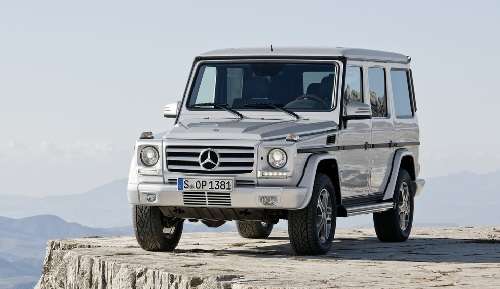 Most people would assume that the sport utility vehicle with the most cache as an urban transport for the rich and famous is a swoopy, sporty looking, low-slung model. Most people would be mistaken. The ultra-SUV for the Grammy winning set is not sporty looking at all. In fact, it goes to great lengths to retain its boxy shape. The most exclusive luxo-ute is the Mercedes-Benz G-class and it is thoroughly updated for model year 2013.

Hip To Be Square
The G in G-Class stands for Gelaendewagen, which roughly translates to “it’s hip to be square.” The G is an icon and it boasts the credibility of being traced back to a quasi-military vehicle. Although it looks like it is made from prison cafeteria trays held together with cartoon bolts outside, inside it is as plush as any other tall wagon that starts at an MSRP north of $100K. What makes the G so cool is that it is so not cool – in a good way. Sure a Jeep wrangler or a Toyota FJ Cruiser is as capable off-road for literally a quarter of the price, but let’s face it, the G is going to dinner in the snow at Aspen, or from home in Brentwood to a trendy LA club.

Credit Mercedes for giving the G-Class buyer what he or she wants. What they want is power to spare, a list of gizmos that aid in off-road crawling, and an interior that makes them feel special. Very, very special. Starting with power, the “standard” G550 comes with an eight-cylinder engine with 391 lb-ft of torque. It is coupled to the corporate 7-speed automatic now in its sixth generation. That pairing is much more than is needed for stop-light to stop-light cruising. However, the look of the G is all about being able to climb a redwood tree while towing a cabin cruiser. So for those who want the extra-grunt needed to impress Porsche Cayenne owners, there is an optional AMG-built twin-turbo V8 with 560 ft-lb of torque. Auto stop-start is of course standard. One must be ecologically sensitive, mustn’t one?

Outside the G may have changed in many ways, but you won’t notice. Of course the now required-by-Imperial-mandate LED headlamp additions have been added. Red brake calipers are optional. The rough and ready G does now also have such safety features as blind spot assist, parking assist, and adaptive cruise control. Each one of these features simply explodes the myth that this is an off-road vehicle.

The interior is very plush, but the COMAND infotainment screen seems to have been forgotten, and then added last minute. It looks disturbingly like a Radio-Shack Nav. system one would buy while picking up batteries and then perch on the first flat dashboard spot available. That said, the seats and steering wheel are simply gorgeous. The passenger seat stares at a grab handle which is perfect for holding on to while plinking zombies with your hand cannon as Will Smith drives toward the dock for a helicopter rescue.

Yes it is easy to pick on the Mercedes-Benz G, and it seems to be a study in irony, but if you see one you will want one.

LG's New EV Battery Plant Is a Welcome News for Tesla
Tesla Giga Berlin's New Hurdle: It's Not Only the Gov't, but Now Tesla Itself
END_OF_DOCUMENT_TOKEN_TO_BE_REPLACED